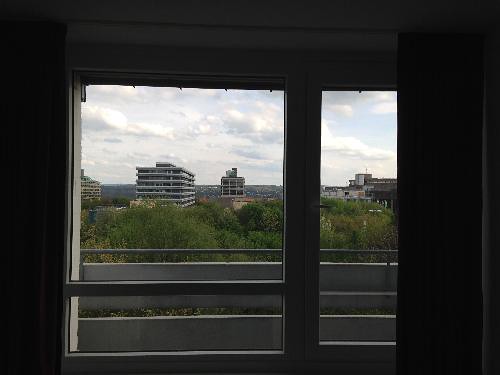 Even through the jet lag and the lost-in-translation lifestyle, my first days in Germany have been great! We were graciously welcomed on the first day by students at the airport and some faculty at the university. We were shown around campus and got some information about the classes we would take. Although we were not given much detail about anything, the first day was a good way to get familiarized with campus. The students that picked us up were great about answering any questions we had about the culture and school.

On the first day, we also saw our awesome rooms! Each student has his/her own rooms in a small apartment-like suite. This apartment has a bathroom, living room, and kitchen for about three people. It doesn’t have wifi, unfortunately, but we do have a port for an Ethernet cord. I live on the fourth floor and have a balcony that overlooks the campus. The view is beautiful! This area is much greener than Philadelphia; there are trees everywhere. Europeans commonly leave their windows completely open (without a screen) for a nice breeze. I quickly picked up this tradition.

My two housemates are very nice. They are both exchange students from France and can luckily speak English (some of the other Drexel students were not as lucky with their roommates’ language abilities). Although most people in Germany do know some English, not everybody knows it conversationally, especially the older people. All signs are still in German and communicating with strangers is not always easy. However, everybody here does study English at one point, so some of the language is known by all.

On the first night, we decided to go out and explore Bochum. Downtown Bochum is accessible easily by train from campus. That is where students go to have fun. Although we probably could have figured it out on our own, we were lucky to be escorted to the city by one of the Drexel student’s roommates. He has been in Germany for most of his life and was very familiar with the area, so he took us to some trendy spots in the city. The next day, we decided to go to Cologne. Our new German friend showed us that this city is also easy to get to by two trains. There is a main train station in downtown Bochum where many regional lines go to big cities across the country. It is very convenient.

Cologne is a beautiful city. It is a very old city with a big cathedral as the main attraction. I find it interesting how different the idea of “old” cities is in America and in Europe. For us, our oldest cities were built around the 1500s, only 500 years ago. In Europe, many places are thousands of years old! Cologne, for instance, was founded in the first century AD! It is difficult to imagine something so old and with so much history. Overall, the first weekend was a huge success and I am excited to start classes on Monday!