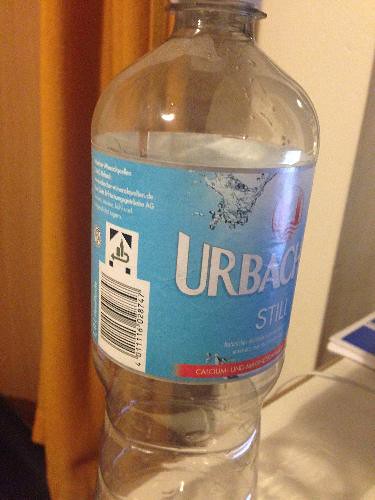 Well after spending two full weeks and 3 weekends here, I am pretty sure that most of the culture shock and major international differences have made themselves known. Nothing is too extreme, but just a few small things that take some getting used to. The first major dilemma for me is something that I was warned about, but did not take too seriously. Germans love their sparkling water. I personally drink water 90% of the time and am not a huge fan of carbonated beverages and I absolutely hate sparkling water. I still cannot get over how hard it is to buy just regular bottled water sometimes. Most places carry just sparkling water or overly priced still water. In turn, I just got into the habit of carrying around a water bottle full of tap water that my roommates advised me is safe to drink over here.

Other than the water dilemma, most of the other beverages and foods are similar, if not even better over here. The Fanta soda tastes more like real oranges, the ketchup tastes more like real tomatoes, and the bread I the freshest I’ve ever had. The mayo also tastes much better here, which would explain why most Germans use it just as much as Americans use their ketchup. This is something that seemed very strange to me at first and I was skeptical to try it because of how much I dislike mayo in the states, but it was part of the culture so I had to try it and I really have grown to enjoy it. In America I put ketchup on almost everything, so between the ketchup tasting more natural and the mayo tasting so much better, I actually now will use a mix of ketchup and mayo on my fries and other foods I would typically put just ketchup on.

The next big thing that I ran into is for one reason or another, I always try opening doors the wrong way. This may sound dumb, but when you walk up to a door you typically know whether to push or pull, well myself as well as most of the others on the trip have all been having a very hard time with this. I have since just gotten into the habit of taking it slower and looking at the hinges to decide whether to push or pull. Like I said, it sounds very silly, but you will see once you’re here.

Another major difference in Germany is how conscious they are about recycling. Almost all places have a minimum of 3 recycling cans for different types or recyclables. The also have implemented a bottle refund here. Every bottle is an additional charge of €0,08 and cans €0,25 that you get back when you return the cans and bottles. This is a great way to make sure people do not litter or just throw out their recyclables when its just more convenient to be ignorant. When you are literally throwing money away, people become much more aware about recycling. Another big thing their conscious about is the use of plastic bags. We are used to being in American food stores and department stores and walking out with many plastic bags that are often times just thrown out once home. However in Germany, the only plastic bags available at food stores must be purchased, which really encourages you bring your own bags and reuse them as much as possible. I am 100% for all of this added attention toward recycling.

So far I am in love with this country and enjoying it more and more every day.