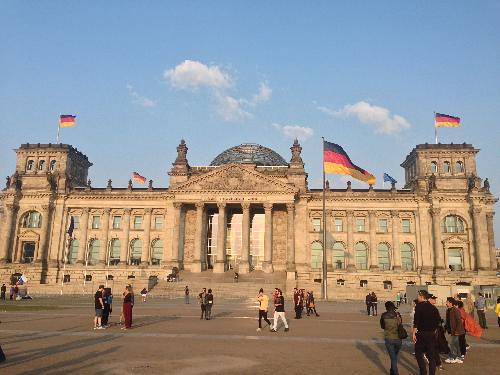 This past weekend a few of us decided to take full advantage of a four day Easter weekend and took the trip to Berlin. By the time we decided to plan this trip, train and bus tickets had already risen too high for us, so we decided to try about another method of transportation we were told about, Bla Bla Car. This is basically an online car pooling service where someone driving form one city to another will post how many openings they have in their vehicle and you pay them a much cheaper price that other transportation would be. You can view each driver’s ratings and reviews to help decide which one is the best choice for you. For €45 I was able to get there and back, as opposed to the train or bus costing over €60 each way.

Once arriving I checked in at my hostel, Industrie Palast, which turned out to be a very inexpensive, yet extremely nice hostel. The staff was friendly, everything was very clean, the lobby had free wifi, a bar, a pool table, and plenty of couches to hang out and talk with others, all for only €16 per night. It was also located directly across the street to one of the train stations, a popular club, and plenty of food as soon as you walked out. The Berlin wall was less than a 5-minute walk away and the train could be used to get to any other attractions on your agenda. I would highly recommend either buying a train day pass for €6,40 or the 4 day weekend pass for €20 depending on your plans. Something that I ran into was someone trying to sell me their day pass for only €5. I was very concerned because they were a random person that came up to me out of nowhere; I just assumed he was trying to take advantage of a tourist. Then I was told by others that this is very common because if someone buys a day pass in the morning then no longer need the train, they will attempt to get rid of it and it is still good for the rest of the day for whoever buys it. Really it is a win win situation, so don’t be alarmed if this happens to you.

As far as food in Berlin goes, it is all great, even the non German food. On my first day we went to an Indian restaurant called Yogi Snack that very authentic and tasted great. We also visited Burgermeister which was only a 5-10 minute walk from our hostel where we had some of the best burgers any of us have ever tried, which was not expected from Germany. It was a smaller shack under the train tracks, but it had a line around the building, it kind of reminded me of the equivalent of Pats and Geno’s in philly, I would definitely recommend giving this place a try. Beyond this, you can never go wrong with the smaller food stands, café’s, street bratwurst venders, or just about anything else you see. However, one thing to watch out for the expensive water at restaurants. We found out the hard way that most places will charge you per class for even just water and it can cost as much as €3 for just one glass! So be sure to ask about this before you go chugging your first class.

Berlin is a very interesting city where the majority of people sleep late into the day and stay out until sunrise the next morning. If you can get yourself out of bed at a reasonable time, this is the perfect chance to explore the city before it gets too crowded. In one morning of exploration me and two others stumbled across a very nice park called Görlitzer Park. It was a very large park full of green nature, people BBQing, riding bikes, and enjoying themselves. It might not be a bad idea to pack a lunch, grab some drinks, and hang out in the grass for a few hours to relax midday. While there we also made sure to visit the Berlin Wall, German Parliament, The Memorial to the Murdered Jews, Berliner Dom, and TV Tower. Except for the Berlin Wall, these are all fairly close to each other and would make for a very good walking day tour. We were lucky enough to have someone with us that was very familiar with the area to show us around, but do not be afraid to grab a map, circle a few destinations, and explor