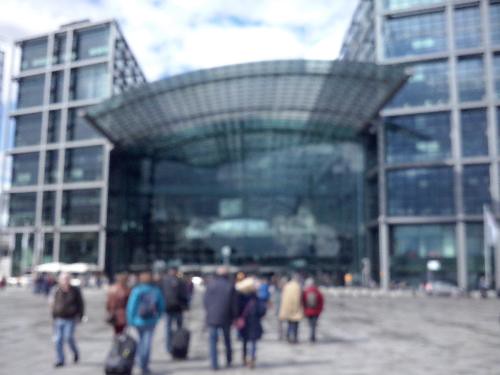 Cars, bikes, trains, planes, and even boats: all are among the different methods of transportation one might take to get from one place to another. In this blog entry I will explain in detail some of the transportation methods I use to get around in Germany from small to large scale.
Directly on campus, the most common method of transportation is simply one’s legs; that is, walking from class to class by foot. At the disposal of those who wish to use it exists another option, which is my personal favorite means of transportation: the bicycle. There are several bike stations across the campus, from which a student can rent a bike and return to any of the other stations. This bike sharing system, called “nextbike” is free for students for the first hour (a word of wisdom however: be sure to register yourself as a student when signing up for the service, as I neglected to do and was thus charge seven euros). There is a convenient app to go along with the service which shows you on a handy map where the nearest stations are, so that you might not be late to class trying to park your bike. In theory, this is a great idea which I hope to see brought to the states in the nearest future possible (it is actually not a novel idea, as I’ve seen it in many cities around the world, yet we in the US still have not adopted it for some likely unconvincing reason).
Next, to go from campus to the nearest downtown area in Bochum, one can take the U-bahn, which is much like the subway (or metro) system in most US cities: being underground in the center and emerging into the superterraneous landscape upon entrance into surrounding areas, such as the RUB campus. This subway system is included in the travel pass all RUB students are given with enrollment in the university (including exchange students!). This means someone such as myself can go in and out of downtown Bochum as frequently as he wants, creating a sense of freedom which is lacking for those who rely on SEPTA in Philadelphia (where, by the way, the trains and stations are of a much lower standard of civil hygiene as compared to most other subways systems I have seen).
When ones arrives at a respective city’s Hauptbanhof (“main station”) he will find himself in a transportation hub which links that city to much of the rest of Germany, if not the rest of the European mainland. From the Bochum Hbf, we RUB student can also ride for free to surrounding cities such as Dortmund, Essen, and Düsseldorf.
For larger trips, the regional rail is also an option, of course. However, I have opted to use a different service which I find to be one of the most representative ideas of progressive and modern thinking in relation to technology. That idea is called “BlaBlaCar”. BlaBlaCar is an online car-sharing service wherein members can find someone who has a mutual destination, and join them on their journey, all based on trust and user interaction. I have so far used it three times successfully, once unsuccessfully (as my driver negligently left without me), and once expectedly successful (the replacement for the one who left without me). This service is a cost-effective means of traveling for students and also makes use of the several seats that usually go unfilled in the innumerable cars that one may find on road at any given time (which also represents an environmental benefit to the idea).
While I have many trips ahead of me before my time in Germany comes to an end, I have high expectations that I may be able to reduce the financial impact of my travels my making use of these innovative ideas made possible by the internet. I, therefore, would like to dedicate this blog entry to the digital age, which, much like humans themselves, has unlimited potential–what matters most is how we choose to harness it.