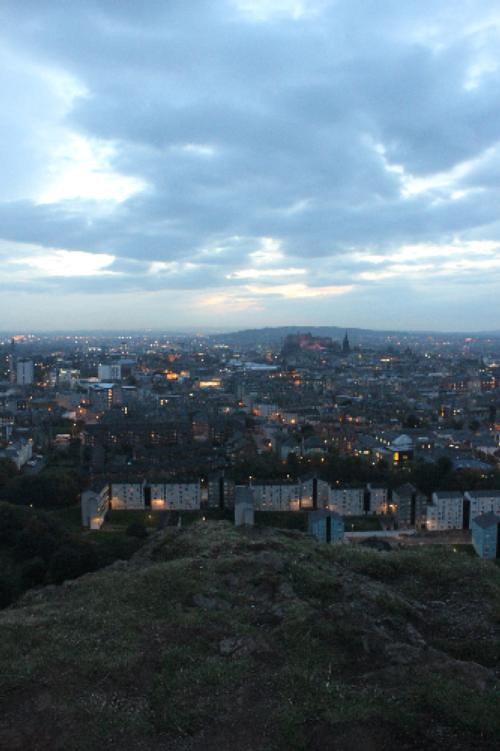 Last evening was a very brisk one and was scheduled to have a full moon so my flat mate, Katie, and I decided to climb Arthur’s Seat. Arthur’s seat is a big rock formation which can be perfectly described as smaller than a mountain, but larger than a hill. It fits directly in the middle of those two things, if you can imagine it. It is a small hike. Keeping that in mind, I was able to walk up it in about 20 or so minutes fairly easily, but I would never be able to run it every day like I watched last night. While Katie and I were catching our breaths halfway to the top, we were passed by a group of young ladies training who were running quickly past us. When we eventually made it up to the top, we were exhausted but amazed.
Arthur’s Seat is only one of the main attractions in the city of Edinburgh. It sits at the end of the Royal Mile directly across Edinburgh Castle. It is right next to the new Scottish Parliament building. It adds for great scenery and can be seen from almost anywhere in the city. I have been tempted to climb it before. So many of the locals have told us that as exchange students visiting, that we must climb it before we leave back to the United States. Everyone has told us to. I finally did it last night and I understood why climbing it was such a big deal to the people of Edinburgh.
It was a magnificent view of the city. Katie and I saw the entire city of Edinburgh once we reached the top of it. To our backs were rolling hills that looked as if they came out of a movie. To our fronts, we looked high over the city. We watched as the streetlights came on at dusk and waited for the full moon to creep out the sky. The city looked small from where we were. Edinburgh Castle especially looked tiny in the middle of the lighted up town. Nonetheless, it was beautiful to see. The moon came out just as we headed back down and that view was even more spectacular. The moon lit all of Arthur’s Seat and gloomed over the now dark city. I could not believe what I was seeing. The experience was definitely one that everyone should be a part of if visiting Edinburgh. It seems a bit odd that such a place exists in such a cosmopolitan area, but it does. It does so well