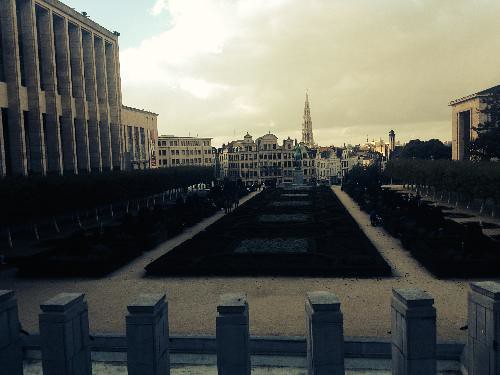 A very-needed fall break took place at Sciences Po this past week and it was absolutely wonderful. The academic calendar at Sciences Po is a bit different than that at Drexel. Besides the difference in quarter and semester calendar, Sciences Po students receive a weeklong fall break a week after midterms, as well as, a reading week near the end of the semester right before final exams.
During the past week, I was lucky enough to return to Paris, as well as, to visit Brussels and Amsterdam. I have been in love with the city of Paris since I was about fourteen years old, however, Brussels definitely stole the spotlight during my trip. I travelled to Brussels via megabus, it was approximately a four and a half hour ride, but the ticket cost only 1 British pound, it was quite a steal. Brussels is a city that is quite small, but feels big at the same time. Le Grande Place is breathtaking, the waffles are scrumptious, and the beer flows constantly. For a chocolate lover like myself, Brussels was a perfect destination. Chocolate stores lined the streets and sold warm hot chocolate on busy autumn days.
Amsterdam was also beautiful, but the weather ruined the magic of it. The weather was cold and rainy. It was fascinating how the locals were barely affected by the constant rain. In my attempts to fit in, I bought a scarf and refused to be let down because of the weather. One of my favorite things about travelling, as you will soon come to learn, is trying the food. The Dutch are known for their cheese and I think I visited about five different cheese stores in Amsterdam. The Dutch actually eat their cheese with mustard, which I had never considered before, but completely support now. The tulips are pretty great too.
After my visit to Amsterdam, I returned to Paris via the megabus once again. The ride was approximately seven hours, which made me a bit hesitant, but it was overnight meaning that I completely slept through it. It felt like the fastest bus ride I had ever taken.
Fall break provided me with a chance to not only take a break from academics, but to also travel and explore Europe. I am planning other travels in the upcoming weeks, but it was nice to be able to visit two different countries and two very beautiful cities in one week.