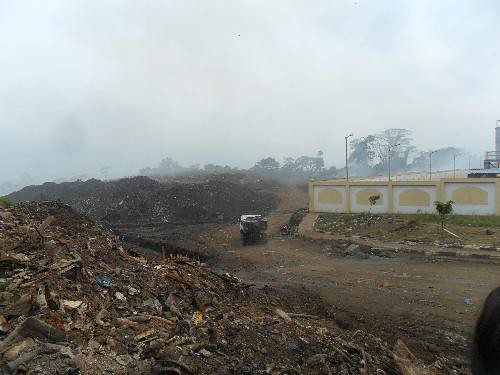 On Monday, our group went out to see some of the waste management facilities as part of our Society & Environment class. This trip consisted of two locations that together handle all of the trash from Malabo. Generally speaking, Equatoguinean waste is not well managed.
The first was the “landfill” on the outskirts of town. I put the word in quotes because it is not a landfill, but it is referred to as one. This is because over the years there have been a few efforts to organize what is essentially an open dump into a true landfill. They’ve build drainage ponds and dug some holes, but that’s about it. I’ve never seen an open dump before, since they no longer are used in America. It was horrible. You could smell it from a mile away, and when we got there the smell was entirely overwhelming. What made it worse was that some of the waste was being burned. Definitely not properly incinerated. Burned. It absolutely reeked. There were just mountains of trash with trucks frequently coming in to dump even more. The environmental impacts were obviously large: it has to have horrible effects on the watershed, there weren’t many plants nearby and the ones that were there had to be full of toxicants, and there was only the occasional lizard. Not to mention, people living anywhere remotely nearby couldn’t possibly be healthy.
The second of these was a recycling plant. In vast contrast to the “landfill,” this was an excellently run facility with environmentally sound processes. And it had a real landfill. This is apparently the only facility of its kind on the entire continent. No other facility in all of Africa uses machinery to separate wastes brought into the facility. This is a huge deal because it makes recyclable sorting a real possibility on large scales, unlike hand sorting. The machines sort incoming waste into recyclables, non-recyclables, and compost. They then push out the waste on a conveyer belt into a pit in a landfill. This landfill has many of the pits, called cells, and each are lined with layers of plastic and clay to prevent leakage. Additionally, like a proper landfill, they’ve got drainage pipes in each cell. The plant only processes a small percentage of the city’s waste, but plans to expand in the future. Because they aren’t fully established, they also don’t ship any of their recyclable waste to any processing plants, but in the near future they plan to have this capability. Additionally, the plant aims to be able to create power with the methane released from the decomposing waste. So currently, what they’re really doing is sorting waste in the landfill into compostable and non-compostable waste.
This is still a HUGE improvement upon anything that’s occurring in this country–EG currently doesn’t recycle at all and otherwise dumps its waste in a pile somewhere. And the rest of the country uses open dumps as well, so this is a step in the right direction.