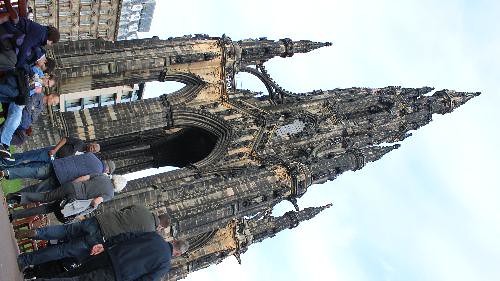 This semester has gone by so quickly. I can’t believe that it is already December. Final exams are on their way and so are deadlines for final essays. It is bittersweet, this time of year. Edinburgh has been so good to me. I’ve learned so much about the British and European culture. I’ve been taking three history classes in Edinburgh Napier University and learned a lot about contemporary and not so contemporary issues surrounding Britain. The Jacobites are not such an easy topic to discuss anymore. I expect many of family members will ask how Scottish people are or how they feel about Jacobitism after they’ve been watching the new TV show Outlander. My family members may also ask how my time was in Scotland during their historic referendum vote for independence. I was blessed to have been in such a ‘hot’ political time for the country. The referendum and the joining campaigns were in full swing when I first arrived in Edinburgh. I was lucky enough to be in Scotland’s capitol while the country was divided on voting either Yes or No. My brilliant teacher, John Burnett, taught me what Scottish nationalism meant. He is from the Highlands and very much a Nationalist. My professor taught me where Scottish pride comes from and where it needs to be channeled for the future. He debunked the myths surrounding Scotland. Before I arrived I assumed, like most Americans, that everyone everyday would wear tartans and kilts. I assumed haggis and blood pudding was only a joke and rarely actually eaten. I assumed both dishes would taste horrible as well. I thought that I would hear nothing but traditional music and bagpipes out on the streets. I thought that all Scottish people wanted their freedom from England and hated being British. In contrast, I learned that Scottish people embrace their Britishness and are in fact very active in their part with the progression of Britain as a whole. I learned that Scots felt the same loss during World War 1 as the English. They also felt the same pride as their counterparts. I learned that the Highlands were greatly misunderstood and wrapped in a ‘Celtic twilight’ that could not be further from the truth. The country as a whole is misunderstood and I am glad that I experienced what is means to be truly Scottish and dually British. My time here was well spent, but I feel as if I still need more time to learn.