Today was officially my first day of classes at London College of Fashion (LCF) and I had so much fun. The course of the day was called, “Historical and Contemporary Fashion Research Studies,” and it lasted the entire day. Our first class was split up into two sections, and it began with brief power point lectures about London, followed by a short activity. For the activity we got treated to samples of typical English snacks, like Twiglets, Jelly Babies and Jammie Dodgers. The majority of the different candies and cookies we had actually tasted like some snacks we have back in America. My favorite of them all was Twiglets, which is a small pretzel stick-shaped snack. It had a chicken barbeque-like aftertaste, and I definitely plan on buying a bag to bring back home.
After the lectures and mini activity we were split up into groups of three to go on a scavenger hunt throughout the city. So far I love how interactive this class is, since it teaches us street smart and real life experiences, rather than just sticking to lectures and readings. We had the opportunity to be adventurous and visit places we’ve never seen before. Our very first task was to cross the Waterloo Bridge, where we ended up at Southbank Centre. There, we saw so many exciting things, like two giant slides, a hang gliding ride, a skate park filled with colorful graffiti and much more. We stopped by a restaurant called, “Eat.” to grab lunch, which was okay. Eat. is a commercial food chain company that serves packaged soups, salads and sandwiches to go. The prices were expensive for such small portions, and the food wasn’t very special, so I wouldn’t recommend eating there. Instead, going out of your comfort zone and finding unique, independent restaurants that you can’t find in the States is much more worthwhile.
After that we continued on to our next destination, which was Covent Garden. Covent Garden is probably my favorite place I’ve visited so far, since the architecture was so cute and old fashioned. We stopped by so many little shops with interesting window displays, like Venchi, Whittard and Paperchase. My group tried almost all of the tea samples at a teashop called Whittard, and then I bought a delicious cone of cappuccino and stracciatella gelato at a dessert shop called Venchi. At the end of our exploration we walked back to campus, where LCF treated us with a refreshing cup of champagne. Overall, the day was so fulfilling and I’m so glad that I got to see new parts of London that I haven’t seen before. 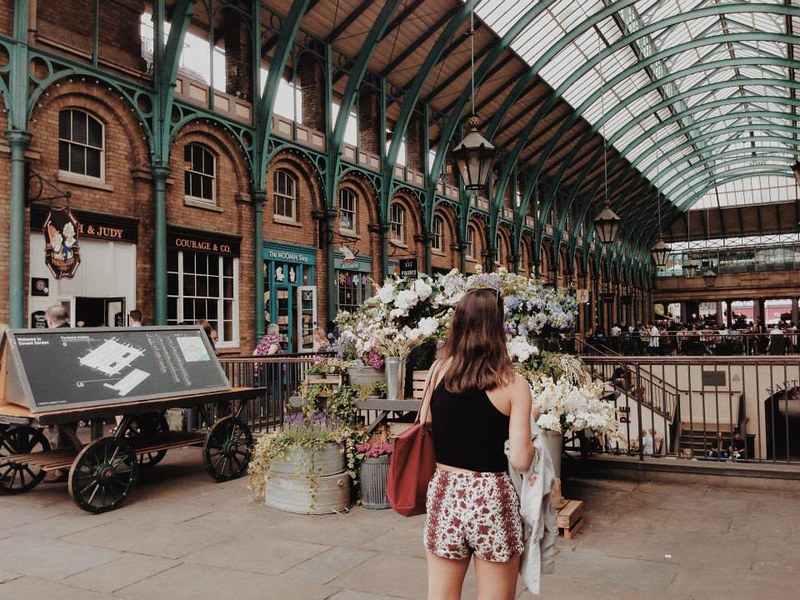