Today was the most eventful day I’ve had in London yet. It felt like one of those jam-packed days I had in Paris! My roommate Arin was in London for the weekend, so we met up and spent the entire day out. We explored West, Central and East London all in one day.

Our meeting point was at Core Collective, which is a workout studio in South Kensington. There, I ordered a really healthy smoothie and then we headed to the bus stop where I coincidentally ran into one of my sorority sisters and a girl that used to be in my dance class. Our bus then took us to the Victoria & Albert Museum where we happened to run into another group of Drexel students. Several of them were also Design & Merchandising majors and one of them was actually my group partner for one of my classes back at home. At the museum we visited the Shoes, Pleasure and Pain exhibition, which showcased an evolution of women’s shoes throughout history. There, I got to see one of my favorite shoes of all time, which were a pair of black 3D printed wedges. The wedges had an intricate geometric frame and inside the frame laid a pair of nude heels.

Shoreditch was where we decided to have brunch and there we had Peruvian tapas at a restaurant called Andina. The interior design was really artsy and the food was absolutely delicious. I ordered two heirloom tomato salads, one with passion fruit mash and another with sweet peas, apple crisps and sweet mashed potatoes. After that we walked through Block Park, which was a street filled with unique pop up shops and pop up restaurants. We then took the tube to Ball Park, where we went shopping at the humongous Westfield Mall. There I got to shop at Pull & Bear and Fatface for the very first time. These were two very cool stores with rustic interior designs. I actually ended up buying a crop top from Pull & Bear for only $10. We completely forgot that London stores closed earlier than American ones, so we got kicked out of the mall at 6pm, since it was a Sunday. 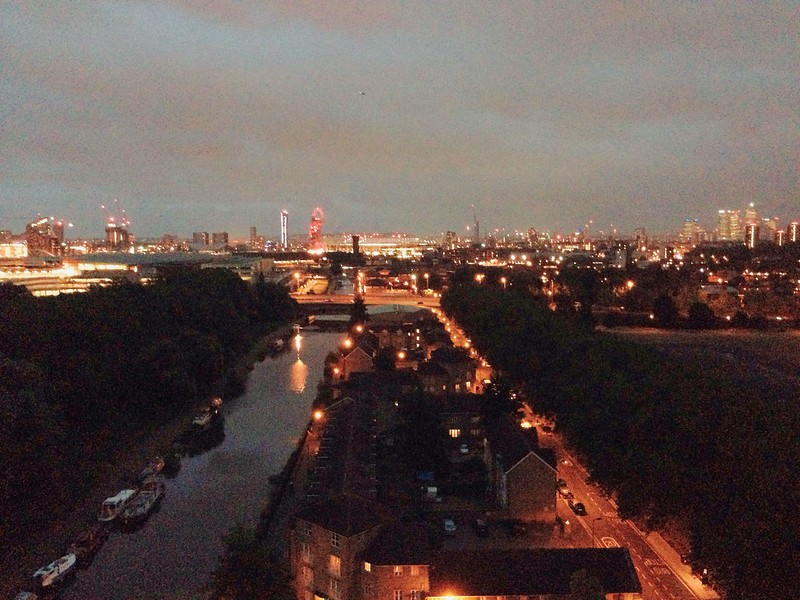 A night view of the Olympic Park

From there we went to one of Arin’s friend’s flat in Stratford, which was in a beautiful building with colorful tiles on the outside. The inside came completely furnished and it was new and modern. They even had a balcony overlooking the river. Her friend is actually Australian, so we ended up meeting a group of her fellow Australian roommates and friends. They were so nice and made us a home-cooked meal of arugula salad with grilled chicken. After dinner they took us up to the twelfth floor rooftop where we saw a gorgeous night view of the city lights and skyline. From there we were even able to see the Olympic Park.

This morning I left the house at 10:30am and I didn’t end up getting home until 10:30pm. I did so much walking, but it was so worth it. Oh, and did I forget to mention that it was also a rainy day? We definitely made the most out of this dreary day!