Three 2,000 word essays, one group presentation and one editorial photo shoot later, the final week of my London College of Fashion program is finally here. Never in my mind would I have ever thought of spending over $500 on clothes for a professional fashion spread. Styling has been one of my favorite courses of all, but it took a lot of obstacles to execute it. For this class we were split up into groups of twos or threes to style and photograph a theme of our choice. By analyzing the Fall 2015 runway looks from all four fashion capitals, my group ultimately decided to do a sixties theme. However, we changed our minds about five times until we finalized this.

One of my partners was really adamant about doing a shoot revolving around bright colors, but the problem with this was that “bright colors” isn’t a specific theme. Therefore, we went down the sixties pop route with bold colors and color blocking. The next step was the shopping process, which was the most long and tiring task of all! We were required to style eight separate outfits that included shoes and accessories. This meant that we had to purchase a ton of clothes, maintain their pristine conditions and then return them once we were done with our project. For our very first weekend of shopping we went into literally every store that we could think of in Oxford Circus. H&M, Topshop, Primark and Zara were just a few of the stores that we browsed in. After six hours of shopping in over ten stores, we were still not able to find everything that we needed.

Once we came into our next class to present the different outfits we styled, our professor shred us apart. The main critique we received was the fact that the silhouettes we chose were too modern and didn’t have that sixties aesthetic. Our professor then told us that we had to incorporate some prints into our outfits in order for this project to work. This meant that we had to entirely scratch our first idea and go buy completely new outfits within forty-eight hours. However, our second weekend of shopping surprisingly went by really fast and it took half the amount of time that it took us in the first weekend. In addition, after mixing in prints, it was also so much easier to find sixties silhouettes. 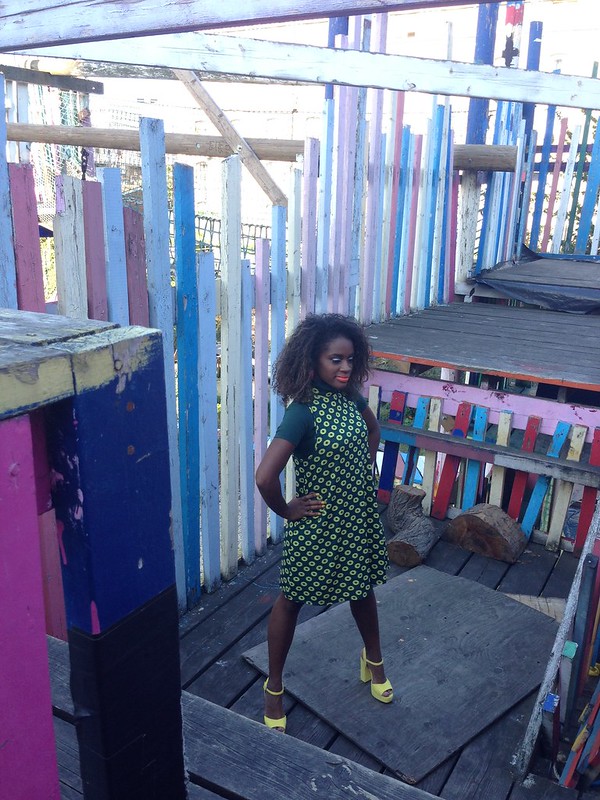 Behind-the-scenes shot of our model, Genet

As a result, our new outfits were much stronger and our photo shoot was more successful than we could have imagined. Our professor was so proud of the improvements that we made and now I can proudly say that I have experience styling, photo shooting and editing a fashion shoot all on my own.