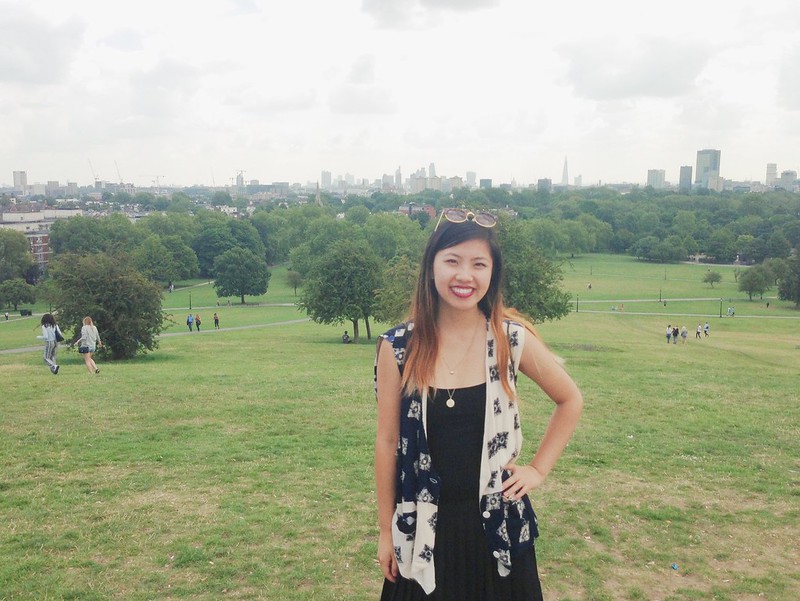 The view from the top of Primrose Hill

I can’t believe today was the very last day of my first portion of the study abroad program. Today we had our very last class, where our professor took us to Camden to explore the block of colorful houses. At the very end we walked up Primrose Hill, where we got a skyline view of London.

After this brief class we had five hours to spare before our London College of Fashion graduation. Right when we arrived our professors handed us a gin and tonic drink and we had time to take a bunch of pictures in front of a great view. The graduation took place on the very top floor of our college building and it had a balcony overlooking the city. The college even hired a professional photographer to take pictures of us throughout the event.

After getting the chance to mingle with everyone we were sat down at rows of tables filled with cutouts of cat pictures. Cats happened to be the theme for the night, which I thought was really fun and quirky. Each seat had a homemade cupcake made by our study abroad coordinator. She even mixed pitchers of Pimm’s for us, which is a traditional British cocktail that’s an equivalent to sangria. The drink is typically filled with fresh fruit, like oranges and strawberries too.

For the rest of the night we got to see slideshows of everyone’s work throughout the program, as well as presentations of the very best projects. At the very end we were given large London College of Fashion totes, which will be extremely useful as a carry-on bag for my flight back home.

After graduation ended I went to grab dinner with the new friends that I’ve made for the very last time. We decided to go to a nearby pub called Penderel’s Oak. After two months of living in London, I finally had my first traditional British meal of bangers and mash, which was delicious!

Overall, today was extremely satisfying. However, it was also sad saying goodbye to all the new friends I’ve made that live across the country. It’s so hard to imagine having to stay another three weeks to a take a class that won’t be filled with over twenty people from all around the world anymore. Instead, it will just be me and seven other Drexel girls, so I’m going to miss seeing a crowded room. These women have inspired me in so many different ways and I can’t wait to see where we all end up in the future and possibly collaborate and work with some of them at some point.