I would like to take the time to talk about a very interesting and worthwhile class here in Sydney. I am currently enrolled in PHYS1500: Astronomy, which is a course that assumes no prior physics knowledge (though if you have some it will give you an edge on the class). It is a great science elective if you are interested a general, yet thorough overview of everything from stars and planet to dark matter. The course has a great lecturer and guest lecturers that come in and talk about their special areas of research. The physics department also got a brand new building that they just finished for this term, so all the Astronomy classes are held there. The lecture theater is complete with three screens where different things can be projected on each and a smart board that displays on screen as well.
Tutorials are basically like recitations where you get together in smaller discussion groups and work to solve a specific problem or debate a topic. Labs are computer simulations that you interact with to show you some of the real world application for astronomy and how computers are used to study everything. For example, this week in lab we learned how to measure pulsars and went through a similar experience scientists went through trying to figure out their pattern and what it means is going on. Super cool stuff. However, by far the best part of this course is the night viewing component. You meet with a small group of your class around 6pm on the day you have signed up and go to the top of one of the buildings on campus, the Jane Foss Russell Building. It is right smack in the middle of campus and you would think from all the light pollution, you wouldn’t be able to see anything, but that couldn’t be farther from the truth. First, since I was the only one not from AU, I was taught what the Southern Cross is and how to find it in the sky. Now I know how to find south at least! Then we got to use these incredibly large telescopes that allowed us the see the rings on Saturn and its moon, Titan. We saw, in detail, the craters that cover the moon and looked at a cluster of stars called the Jewel Box. Unfortunately the clouds rolled in not long after that so we missed some things, but that’s the life of an astronomer! Overall, if you are even slightly interested in space and what’s past our atmosphere, this is definitely a course to check out. 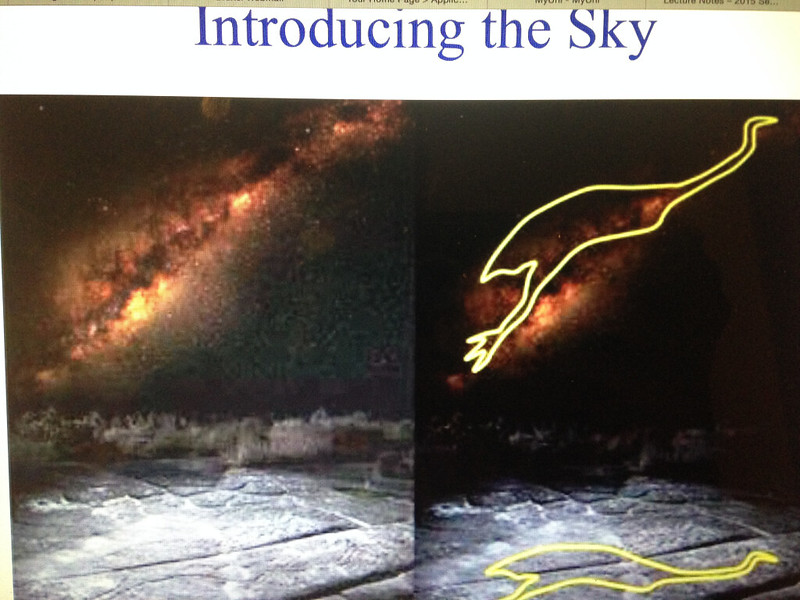 *Interesting fact about the photo: Instead of connecting the stars to make shapes like other cultures, the Aboriginals used the dark spaces, like in this picture, they formed an emu in the Milky Way!