Alright, so enough with the stressful stories, girlfriend! Where’s all the fun stuff at? Let me tell you, Seoul is full of “fun stuff.” After settling down in my officetel, I finally had some time to have fun! My first adventure was exploring Myeongdong, one of Seoul’s hottest neighborhoods and shopping districts — it might be the hottest shopping district ever!

I tagged along with some friends I made from Montreal Canada, Singapore, and Texas (TEAM USA!), who were also going to be exchange students at SNU! Thanks to them, I learned how to use the Korean subway and how to get around the city. And I’ve got to say, compared to Philly’s Market-Frankford line or New York’s metro… Seoul knows how it should be done. Seoul’s metropolitan subway system is very clean, easy to use and just overall looks much more technologically advanced than what I’m used to back home (Will add photos next time ^^).

I’ve always heard about Myeongdong and have seen it featured many times in Korean dramas and variety shows, so I was extremely excited it was going to be the first neighborhood I was going to explore in Seoul. Upon arrival, I was not disappointed! The area was buzzing with Chinese tourists and Korean locals alike. Loud Korean pop music blasted from the speakers as the multitude of stores and shops called for your attention. Korean skincare, hats, clothes, shoes, street food, restaurants galore! Each sign was bright and vibrant, contributing to a colorful and trendy atmosphere. This was the Myeongdong, and I had to assure myself that I was in Korea, right in the middle of Myeongdong for the thousandth time. 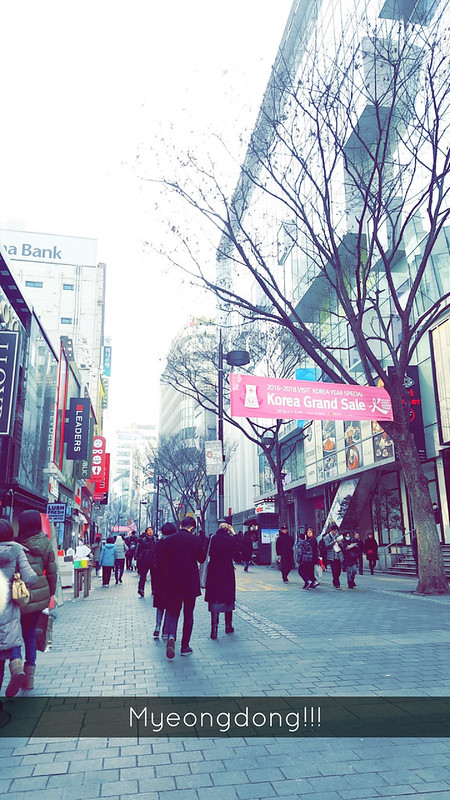 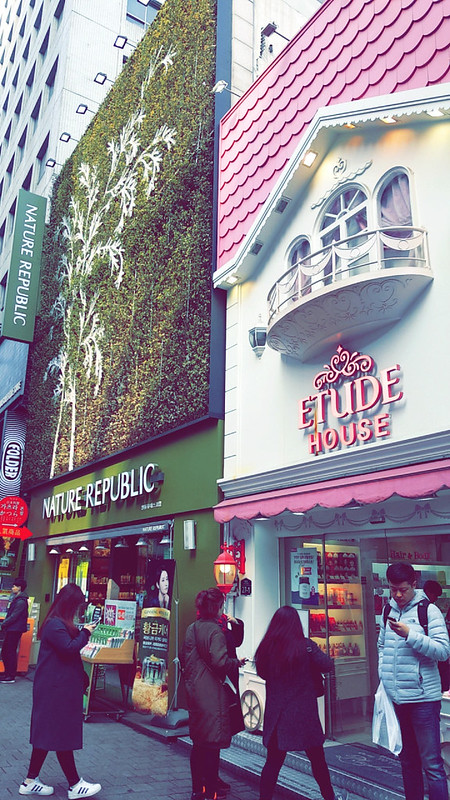 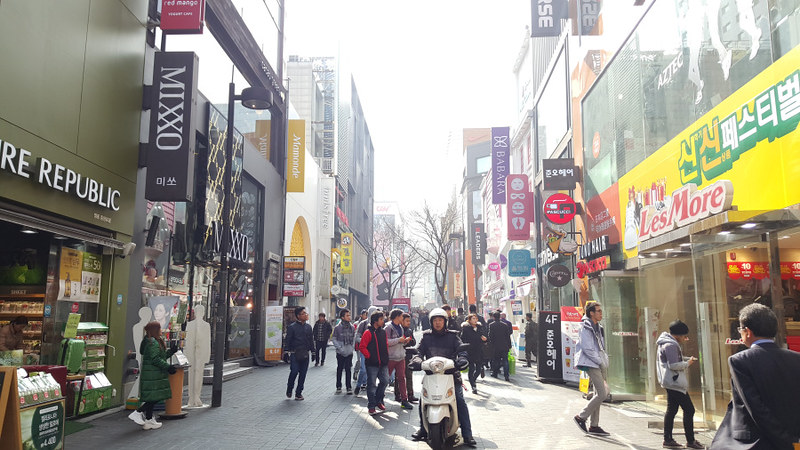 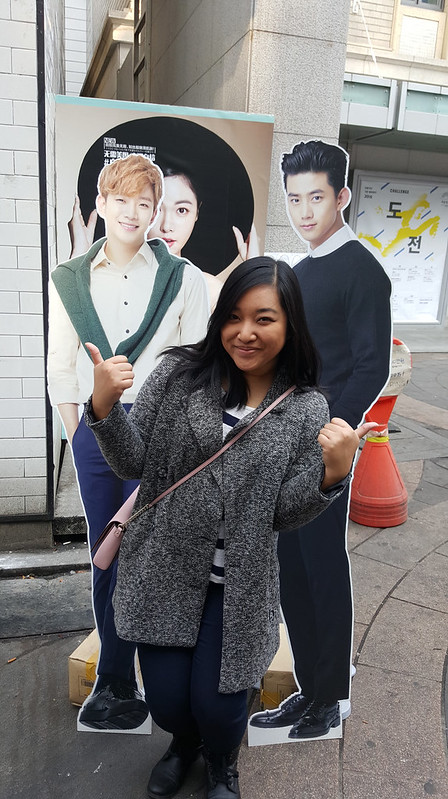 I’m a big Kpop fan, and Kpop Idols/singers and groups are plastered all over Myeongdong! They are there since they endorse certain companies and brands/products. I was so excited to recognize all of them, since I don’t get to see them in the US unless I go to NYC’s Koreatown — and even there, only a few exist. Getting a shot with 2PM’s Junho and Taecyeon! 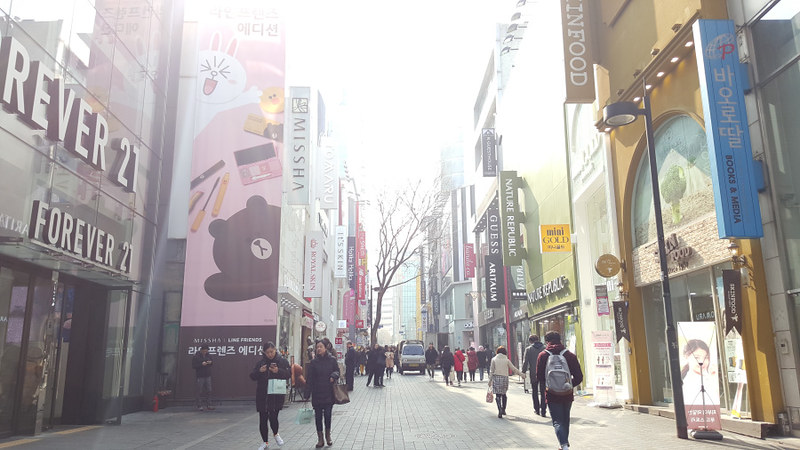 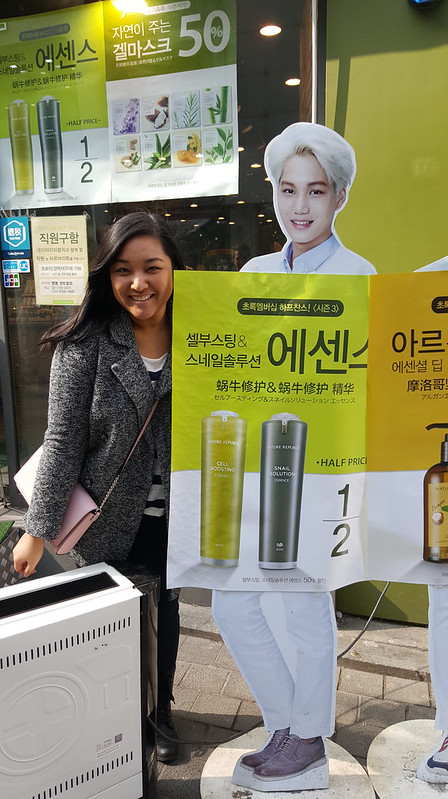 My ultimate favorite Kpop boy group is EXO, and I have a particular liking to a member named Kai. So, when I spotted him on the street, I was so shocked and excited! As you can see, I tried to remain as calm as possible… But I was actually dying of excitement inside. 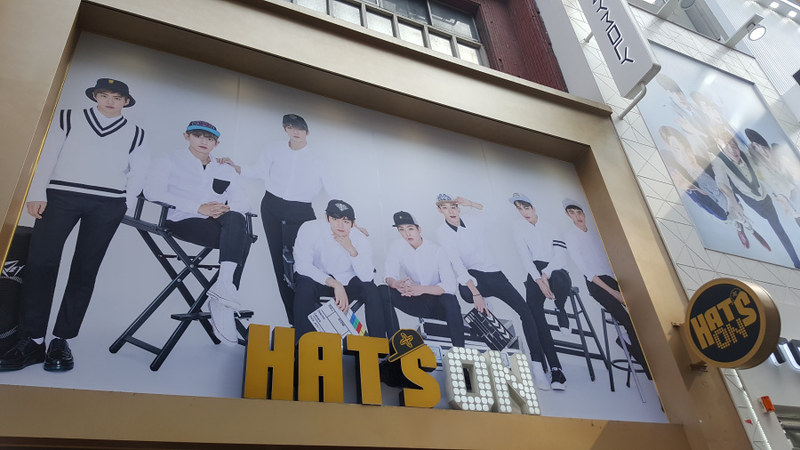 Meet EXO! One of their many, many endorsements is a hat company/brand called Hats On. They’re plastered all over the front of the store to attract tourists — EXO is the most popular boy group not only in Korea, but Asia as well! 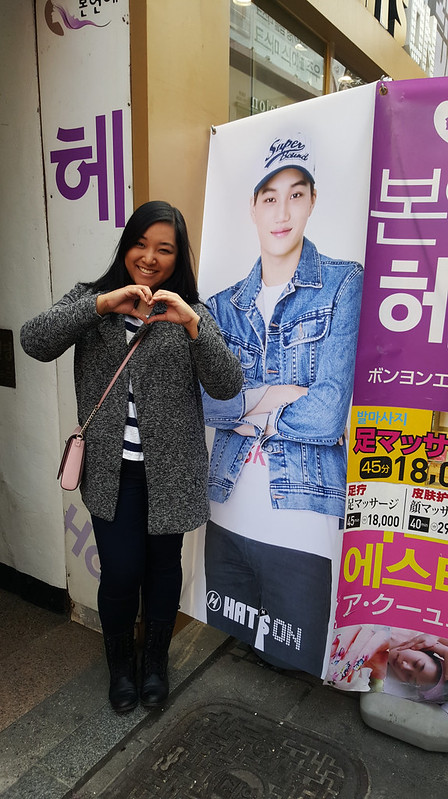 Another sighting of Kai! It must’ve been my lucky day. 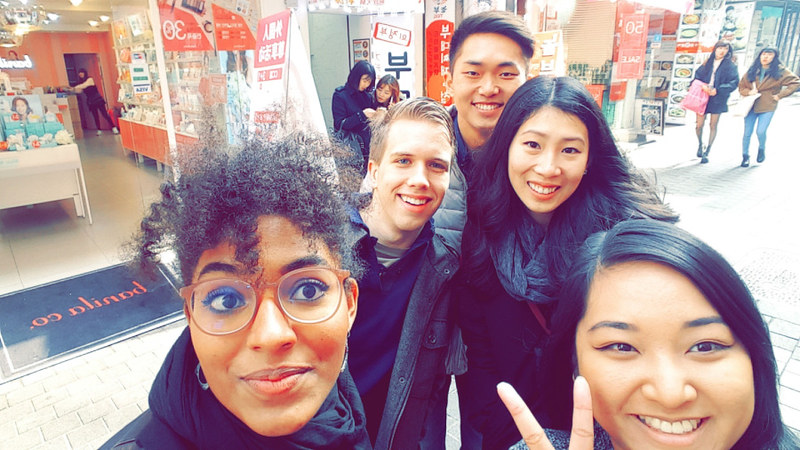 Meet my new friends, all SNU exchange students! From left to right: Estelle from Montreal, Jack from Texas, Jingda (we call him JD…) from Singapore, and Stina who’s also from Montreal! 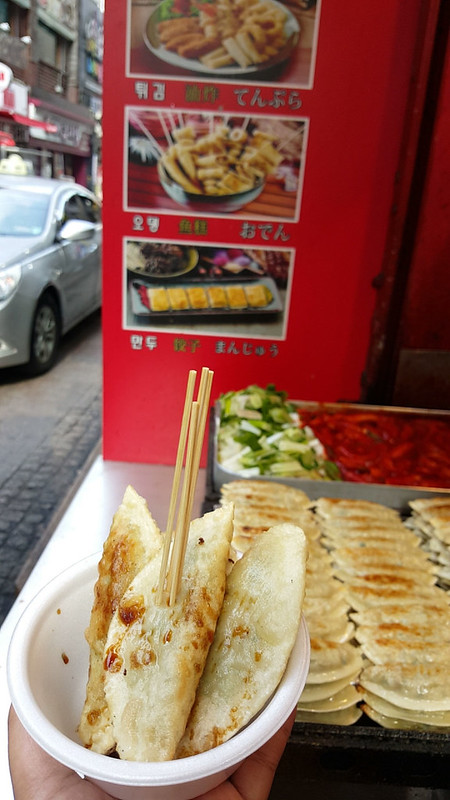 Dumplings are my ultimate favorite food in the entire universe. Luckily, Korea has plenty of them, and for cheap too! Pictured here is “Goon Mandu” — fried korean dumplings found at a street stall in Myeongdong. Of course I had to get some, and they were delicious! 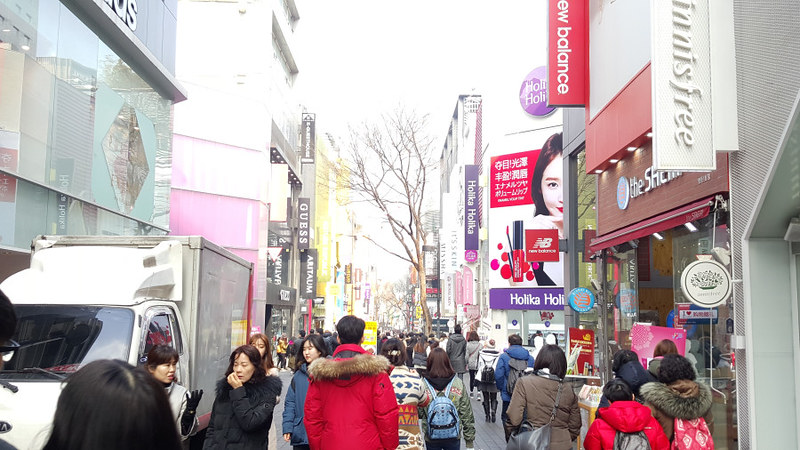 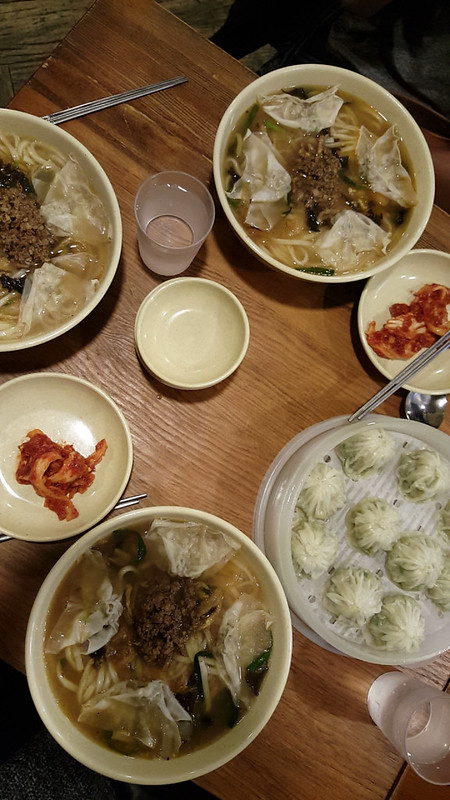 When lunch time came, JD took us to a Kalguksu place to eat. Kalguksu is a Korean dish made up of “knife cut” noodles in a soup broth. This one has minced pork to garnish and mini dumplings, yum! Each of us had a bowl of noodles and shared 10 steamed mandu. 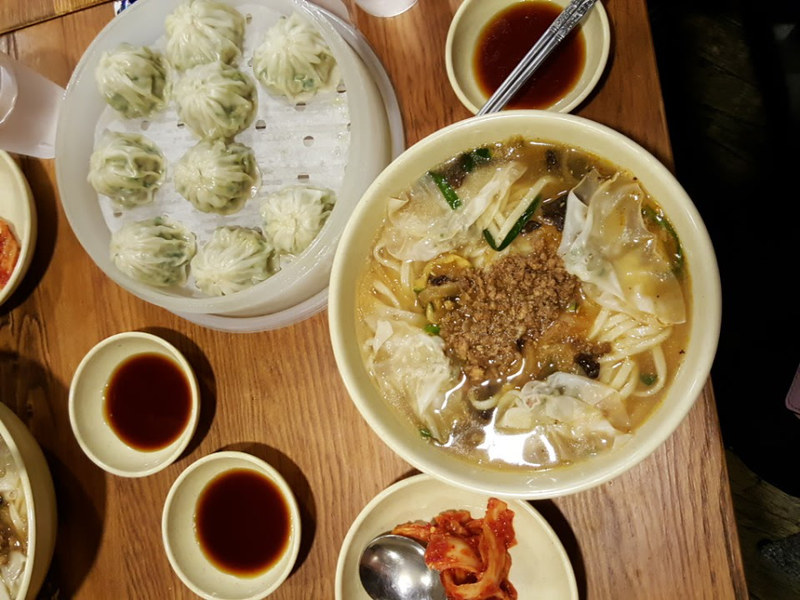 One of the best meals of my life, and I still can’t believe how cheap Korean food is. And what’s even better is that there’s no tax and tip, but the service is beyond amazing. 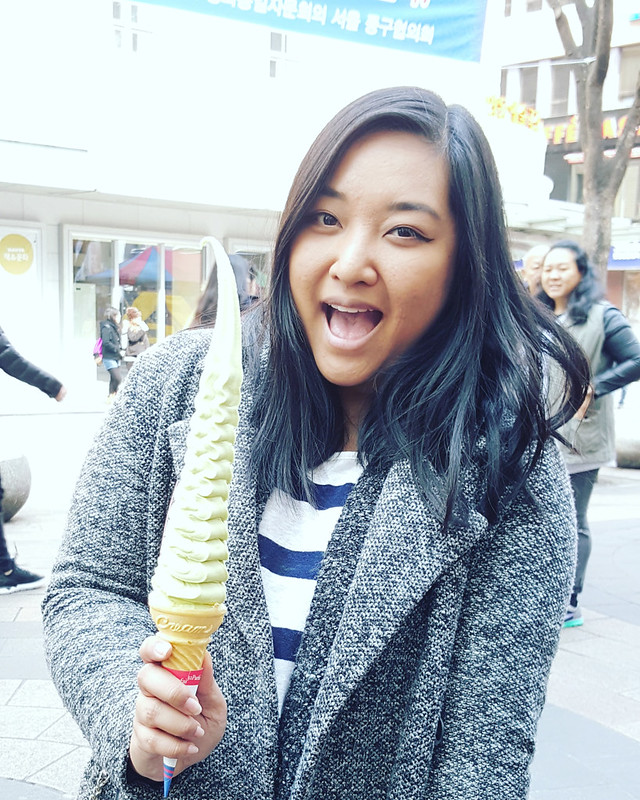 It was still pretty cold in Seoul, around 40 degrees with a high windchill — and while all of my friends were “too cold for icecream,” I was the only one who couldn’t pass up the 32cm tall soft serve green tea icecream for dessert! That’s about a foot and a half tall. They call me the icecream queen. 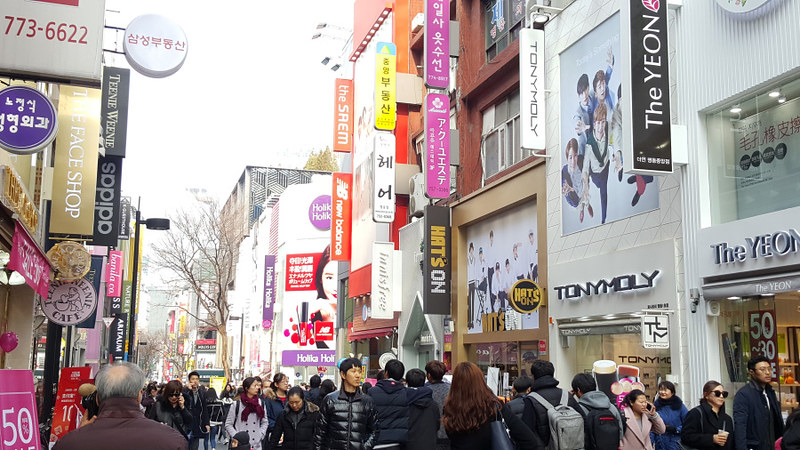 This was not only mine but also my group of friends’ first experience exploring one of Seoul’s most popular neighborhoods after we arrived to Korea (except for JD, he’s more experienced since he’s been here longer). I think it was a great start and introduction to the dynamic culture and exciting atmosphere of the city of Seoul, and we all agreed Myeongdong would be hard to beat. I especially loved the feeling of being surrounded by pop culture that I recognize and love. I felt like, I was finally where I always belonged. I can’t wait to tell you about my future adventures in other neighborhoods in Seoul! Stay tuned, there’s a lot more to come.