I had to make a separate post to talk about my amazing day I had getting tickets to see the sold out London play, Harry Potter and the Cursed Child. At 5:30 in the morning on Saturday, August 20, myself and two other friends woke up and trekked over to the Palace Theatre to queue for cancellation tickets to see the show that day. When we arrived there were about 12 people already waiting in line. We sat down and waited for 4 hours until the box office opened at 10am. Throughout the four hours I switched from reading Patti Lupone’s autobiography to talking with my friends and the other people in line. It was awesome getting to meet other people in line who came from different places around the world.

Once the box office opened at 10 the crowd stood in line for another hour before the box office manager prepped us on the process. Everyone on line was filled with anxiety hoping that they would get tickets for the upcoming performances. Two by two people were escorted inside and after many minutes they came out with tickets in their hand. Around 12:30 we were in the front of the line and the manager came out and showed us where he had available tickets. We immediately went inside and bought three tickets. This honestly felt like we won the lottery. The play is sold out until December 2017 and is one of the hardest tickets to get in West End. 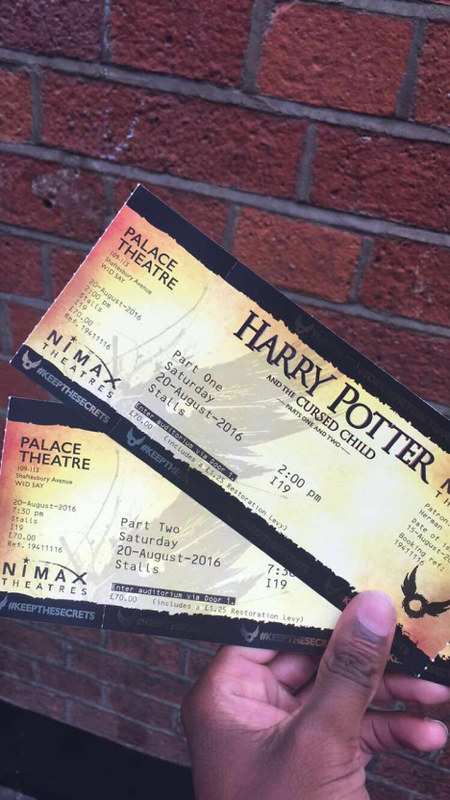 We had about an hour to eat until the show began so we grabbed a quick bite at a diner across the street and then lined up outside of the theatre. Now, what’s amazing about the show is the fact that there are two parts. So the first part was at 2:00pm and the second part was at 7:30. 6 full hours of Harry Potter! As we sat in our seats and waited for the show to begin we noticed everyone’s head turning around and as soon I turned my head around I saw actor’s Darren Criss and Ben Affleck taking a seat directly behind me. There was an initial freak out moment where I didn’t know what to do with myself, but I kept calm and faced forward hoping to appear cool and calm unlike everyone else around me.

As soon as they were seated the show began. All throughout the first part of the play the audience was in for a mesmerizing treat. There were so many amazing special effects that made it seem like we were watching a movie. And the storyline was simply incredible! Once the show was over we went out and grabbed dinner in Chinatown. Over dinner we all fanned out over the entire play and the fact that Ben Affleck, Darren Criss AND Margot Robbie were watching the show directly behind us (yes, we found out later that Margot Robbie was also in attendance).

Once we finished out dinner we got some gelato and lined up at the theatre again for Part 2. What was amazing about the transition for Part 1 to Part 2 was the change in the merchandise area. The t-shirts, programs etc. were all different from earlier on which I found to be very clever. We sat down in the same seats and when our three celebrity friends sat behind us the show began.

The show overall was an amazing experience. This definitely took the cake for one of the best days I’ve had abroad. If you asked me before I came on this trip if I would ever wait for 6 hours to get tickets to Harry Potter and the Cursed Child I would have definitely laughed. But, it was an experience I will never forget, and I’m still reeling over the incredible production I witnessed.