Hello from Paris! I can’t believe I’ve already been living in Paris for over a month. I already have so much to share about this fantastic experience, and I’m happy to (finally) be able to start blogging after successfully battling the French administrative gods to get my life (including internet) in order (which I will discuss in a separate blog post).

But Paris…it’s beautiful. I’ve been studying for French for almost to years, and have really fallen love with the language and culture; however, this is only the second time I’ve been to France. Previously I only spent a few weeks in Montpellier in southern France. Having spend most of my life in Philadelphia, moving to Paris has been an eye-opening experience.

I think the thing that I’ve enjoyed and noticed the most so far is that people here purposefully make time to simply enjoy life. There are always people walking by the Seine, sitting in public gardens, or just sitting in a Café drinking an express. Speaking of which, people almost never work during meals. Unlike in the US, eating is an activity of its own as opposed to something done while multitasking, so when you go get breakfast at a café or even lunch at the Crous (student restaurant) you spend your time enjoying your food, talking or people watching. 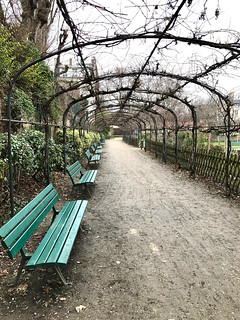 And as for the people, frankly the Parisians get such a bad rep. The culture here is just different, and coming here as a foreigner you have to learn to appreciate it. While it’s true that at first people aren’t as “friendly” as I would say they are back home, but it’s really because people are just reserved until you get to know them. I will say that actually getting to know people can be difficult at times because you have to start off with some sort of clear connection, whether it be that a friend introduces you to someone, you’re randomly assigned to a partner in a class, or you end up doing a sport together. Otherwise, people tend to mind their own business, which I can appreciate.

Overall though, despite some hiccups at the beginning that I will cover in a different post, I am really learning to love it here and am starting to feel at home.