On Sunday, the other Drexel/Collarts students and I, along with four other friends we’ve made, took a three-hour drive to Grampians National Park and, well, we were blown away.

First of all, we are very lucky to have gotten a car for free (yes: FREE) because of a friend who has a friend who works in a car dealership, who just so happens to be one of the nicest people you’ll ever meet. I mean, of course, he gave us a car!

That being said, sitting in the passenger seat while the driver is driving on the left side of the road for only the second time in his life, is a test in not peeing yourself. “You’re just a liiiitle close to the curb there,” “Here, let me open the water bottle for you, you just watch the road,” “No of course I’m not nervous, you’re doing a great job,” and on and on. But we didn’t die, and that’s always good. 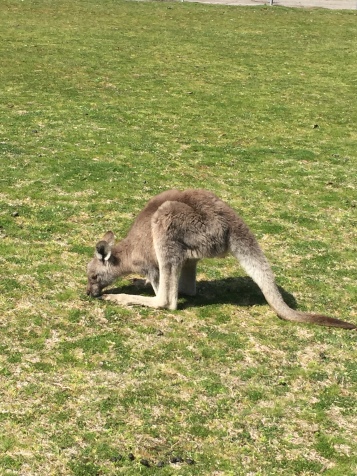 Also, we found out once we got there that, at the base of the mountain that we had to drive up to start our hike, is a kangaroo field.

Look at it, just look at it.

Remarkably, these ones were very calm when we approached them. Apparently, they are a lot more jittery or aggressive in normal situations.

Then, we drove up all the way to the top to a place called Boroka Lookout. The views stretched out for miles and miles. We could see the town below us and nothing but nature surrounding it. My breath was taken away—I thought I had seen the most beautiful thing at Grampians. Well, little did I know.

Anyway, that’s where we started our hike to Halls Gap, the little town at the bottom of the mountain. In total it was six kilometers, which is roughly 3.7 miles. It was a relatively easy hike, mostly downhill, but through the deep woods. The best park about this hike, and what made it so special, was that we saw a lot of amazing things. We saw a lot of different waterfalls, scared a few wild parrots, and I even got service on the top of a cliff (so I skyped my dad and he told me to get off the cliff).

We didn’t go the full six kilometers to Halls Gap, but hiked 4.2 kilometers (which is about 2.6 miles) to Wonderland Car Park. From there, we took the cars to Reid’s Lookout to watch the sunset.

At first, I thought it was an alright lookout, until I hopped the fence to the cliff edges. (PS to the Drexel Study Abroad Admin: this was not illegal or breaking any rules, the fence was just there for safety 😉 ) And got the best views of the day.

Needless to say, I fell asleep in the car on the way back. But, if you’re ever in Melbourne, this should definitely be on your list.