One of the staples of Australian culture is Australian Football or, as the Australians call it, “Footy.” It’s a sport that doesn’t have many rules, any padding, and is as loved as American Football is in the United States. This past weekend, Melbourne held what was the equivalent to America’s Super Bowl: the AFL Footy Final between the Adelaide Crows and the Richmond Tigers.

Funny enough, I wasn’t in Melbourne for the final, but rather some family friends of mine took me with them to Adelaide to visit their daughter.

Now, let me detour for a second from my discussion of Footy to tell you about how we got there. To get to Adelaide, we drove and took the Great Ocean Road, which is a must-see thing if you ever come to Australia. The winding roads of the coast take you up on the cliffs above the water where you can watch the waves crash on the rocks and sand below. The winding roads also made me car sick. But it only meant that we made a few unplanned stops on some really nice beaches.

Not only that, but we stopped at the famous Twelve Apostles. If you’ve never heard of this, don’t worry, you’ve definitely seen it before. It’s a series of twelve large rocks that come up out of the water that attracts tourists from all over. Fun fact: One of the twelve rocks crumbled into the water so now there are only eleven.

The drive to Adelaide was unbearably long and took the whole day. If we had opted to take the highway, we would have been there in eight hours, but my family friends really wanted to show me the coast. It was nice and I’m glad we took the time.

When we arrived at the daughter’s house, we sat around chatting for a bit until someone asked, “What are we doing tomorrow?” They all turned to me, waiting for me to decide. I knew it was put up to me because I was their guest, but I decided on something that I knew everyone wanted to do.

“Let’s watch the footy final,” I suggested. And that was that. 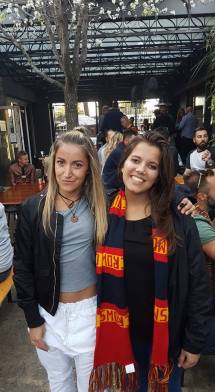 The next morning, I found myself in the middle of a ~pub~ with a Crow’s scarf around my neck. And, quite frankly, I had the best time ever. The bar was filled to the brim with Crows supporters, cheering their team on. Drinks were cheap and food was cheaper. With every goal for the Crows came a chorus of cheers, and with every goal for the Tigers came boos and shouting. It was a lively atmosphere but it was also a safe atmosphere.

I discussed this very thing with an Australian man that I met at the pub. He had seen sports games elsewhere in the world and he explained how footy in Australia was about community. Crowds can get rowdy sometimes but hardly ever dangerous. Children watch the footy, the elderly watch the footy, nuns and rabbis and moms and dads all watch the sport.

Unfortunately, at the end of the game, the Tigers won. It was a sad atmosphere in the bar when the game was over but it didn’t matter too much because, during the game, everyone had had fun.

It was for sure one of the best days I’ve had in Australia so far.