In Mannheim, there’s a massive organization on campus called, ‘Visum’ that creates mixers, events, fundraisers, socials, and group trips for exchange students since there’s so many of us. They do their absolute best to integrate us into the university, to make us feel much more included and as though we play an integral role in the culture of the community. Stemming from Visum, there’s a ‘Social Erasmus’ organization here as well, which is actually run in most European schools that host exchange students, and their sole goal is to incorporate international students into community service and fundraising events.

Not really knowing how to spend all my free time, I decided to join Social Erasmus in order to become more involved in the community, as well as meet more students – both exchange and German. Over the past couple of weeks, we have been brainstorming and researching areas of the community in which we would most like to help out and contribute to. Some of the areas students are interested in are all the way from animal shelters, to polio vaccines, to the refugee crisis. But this past week we started actually physically acting upon our goals of benefiting the community, and hosted a waffle fundraiser.

All prepped and ready to burn!

The proceeds from this waffle fundraiser will be added to one of Social Erasmus’ future events which is ‘Christmas in a Shoebox’ which will be donating shoeboxes filled with toys and treats for less-fortunate children so that they may celebrate the holidays despite their circumstances. When I first showed up, I wasn’t exactly sure what to expect, but the second I stepped through the main doors of the University, I was drooling over the overwhelming smell of sugar that beckoned me further. 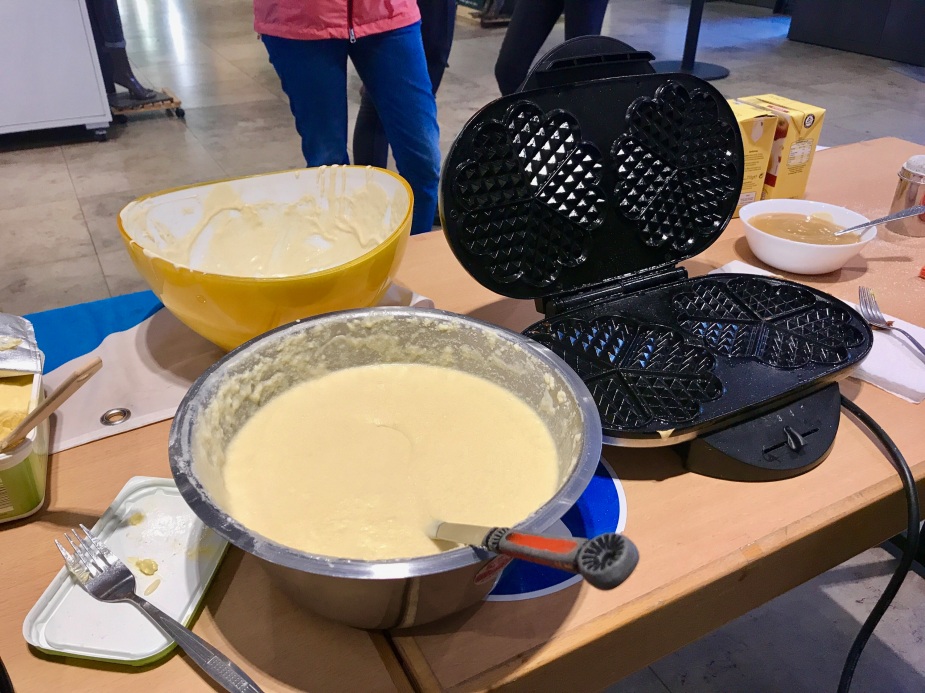 Not only did I have an incredible time baking (burning) waffles for a good cause, I was also making more and more friends as the morning went on. When I showed up to help out I expected to make waffles and leave. This of course, didn’t happen, as things literally never go the way I plan. Yes, I helped out. But because all of the students that were there were German full-time students at Mannheim, they spoke to each other in German. Which apparently, to my shock and amazement, I could actually understand them. I was speaking to customers, chatting with my fellow helpers, and even laughing and joining in on their jokes! In German. Never in my wildest dreams did I think I would make new friends, and learn that I’m much more capable of accomplishing things than I give myself credit for – all while making (scorching) waffles! A true treat!

Drexel University Pre-Junior, co-majoring in Marketing and International Business, currently studying abroad in Germany at the University of Mannheim! Follow me as I journey through the world, one embarrassingly funny story at a time! View all posts by Wiktoria Brodzinska