Before I ever boarded a plane, flew over the ocean, and arrived in Melbourne, I’m not ashamed to say that I had a fair few assumptions about Australia. I thought everyone said “Gooday,” I believed venomous snakes were omnipresent, and I assumed the weather was like the weather in Southern California all the time.

Well: I’ve heard people use the phrase “Where abouts” more than “Gooday,” snakes don’t come this far south unless it’s summer, and the weather is definitely not like Southern California all the time.

The weather was what upset us the most. We had packed tank tops, swimsuits, and flip flops but arrived in Melbourne’s winter which, granted, is not as cold as a New England winter, but is a steady 55 degrees Fahrenheit during the day. We were shivering during the night, and I only packed about one warm jacket. We were disappointed.

That was, until yesterday.

Yesterday, the sun decided to shine in full force, blessing us with an 85-degree day. The perfect time to go to the beach! We ended up going to two beaches: Sandringham and Brighton. They’re both on the same train line so it wasn’t out of the way at all.

The first beach we went to was Sandringham. To get there, you can catch the Sandringham train at Flinders Station and ride it to the end of the line. I liked this beach. There weren’t that many people there, so we were able to get a nice spot and didn’t have to worry about our things being stolen. What surprised me was the clarity of the water from up close, and the blueness of the water from a distance. Also, the water was cold at first but if you give yourself the time to get used to it, it’s not that bad. The one thing I didn’t like about Sandringham Beach was the sand. The sand at Sandringham, and in most places in Australia, is fairly big. The grains are large and look more like little beads than the grains of sand we consider normal. Because of this, the bottoms of your feet will feel pretty painful after a bit a walking.

This beach was my favorite. First of all, Brighton Beach is characterized by the colorful changing shacks that people sometimes rent out. Also, I found so many cool shells in the water along with some sea glass. The thing I loved the most about this beach, however, was all the little critters in the water. There are these little fish that blend into the sand so, if you step somewhere too close to them, you’ll see them dart away in the other direction. I also saw a ton of small starfish with about six or seven arms, just chilling along the shore. The great thing about the water at Brighton is that it’s a gradual shore, so it’s shallow for a bit of distance into the water. 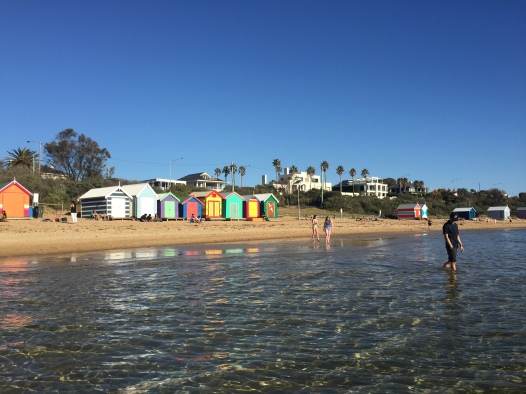 I had a lot of fun and I’m hoping that the weather continues like this.