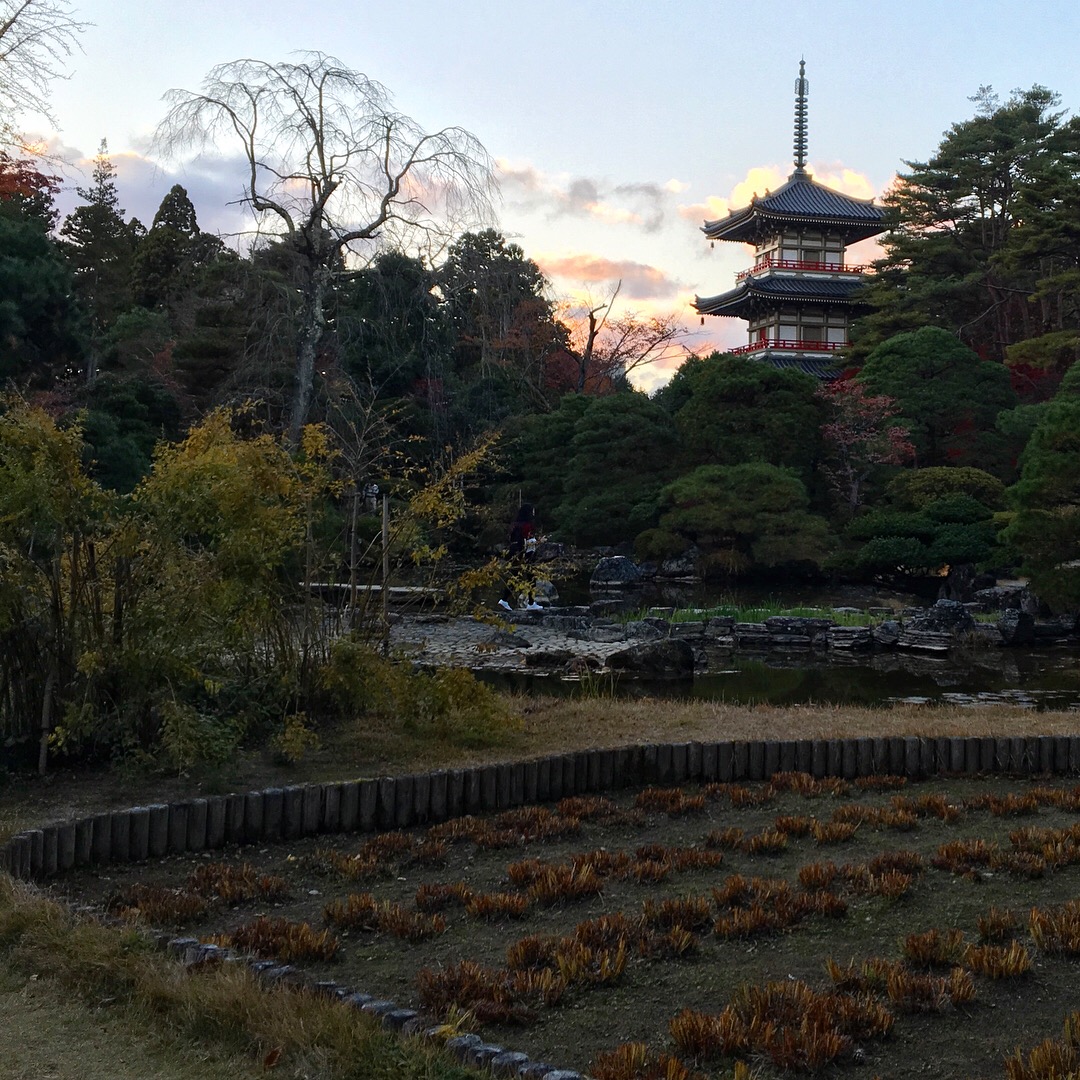 Today, my culture class was given the opportunity to be served tea in traditional Japanese manner! With our hosts being the Tea Club at Miyagi Gakuin Women’s University, we international students were forced to humble ourselves as we experienced the serving of tea in the same magnitude that was given to extremely formal events. Upon arrival at Rinnouji Temple, the location of the tea ceremony, we were awestruck by how beautiful the garden surrounding the temple was! It was clear that the temple gardens were taken care of with great caution and precision. Sprawling hedges and leaves of red, gold, and brown were abundant as well as a small lake surrounding the temple! I believe that it was a show of care, patience, and reverence to the Buddha, as it was an otera (Buddhist temple). We did unfortunately spend too much time outside as the tea ceremony took place indoors. Fortunately, however, we did have a view of the garden from the inside, which made drinking the tea all the more relaxing.

After taking our shoes off and washing our hands, we were taken to a small (and I mean small) tea room, where the tea was being prepared. Through the use of a hole in the middle of the room, coal was placed inside and a kettle was suspended by a metallic handle over the hole (I am rather disappointed I did not take a picture of it myself). The students at the Tea Club told us that, normally, the room was not shown to guests as guests should not see the tea being prepared, but they wanted us to see it firsthand. We had sat in a formal position, on our knees, sitting on our feet. Needless to say it hurt after a few minutes, and all of us were practically begging for the ceremony to proceed so that we could relax. We were told that the coal burning within the hole was arranged with a certain aesthetic–to model and mimic the design of the garden outside. To come to the realization that the tea ceremony was given that much detail was extremely humbling and all the more did it make us want to stay in the formal sitting position, despite the pain. 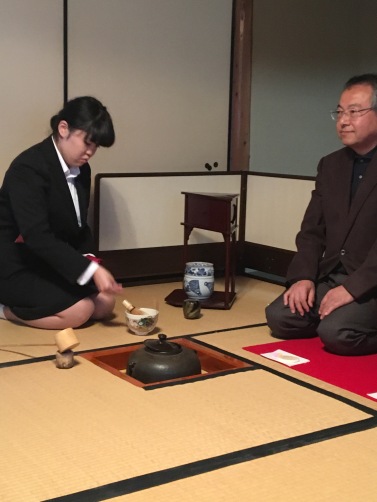 Finally, the tea ceremony began. The steps, in hindsight, are quite simple. Before drinking the bitter tea, one is given sweet snacks–one a sweetened rice cracker, and the other a sugary treat shaped like a flower. According to my Sensei, sugar, at the time, was a rare commodity and as such was given only at special occasions. In order to eat the snacks, one must grab the plate with his or her left hand and the snacks with the right. Before eating, one must say osaki ni (“before you”) to the person on their left, as eating goes from the right-hand most person clockwise. Once snacking was over, tea was served.

Tea was served in special bowls that, according to the head host, cost well over ¥100,000 (~$1000)! We were given special warning to not place these bowls above our heads and, if we wanted to, to observe the artwork of the bowls only near the ground, in order to minimize damage in case the bowls do fall. Procedure to drink the tea began as such: after being served the tea, bow down with hands on the floor. Before picking the tea bowl up, one must, again, say osaki ni to the person on their left, drinking is also proceeded in a clockwise manner. One must balance the bowl on their left palm while holding the side with their right hand. After that, one may drink the tea. Upon finishing the tea, one must carefully observe the artwork of the bowl by spinning it around three times (yes, specifically three times), after which one may put the bowl down.

AND THERE YOU HAVE IT! After the last person was finished, we proceeded outside, marveled at the garden a little bit more, then headed back home. Of course things took a lot longer in person than one might think, especially since everything had to be done carefully, so things were moving a bit slow. It was a pleasure to experience an actual tea ceremony being performed, by students who had spent 4 years of university doing the routine. I am humbled and honored to have experienced such a formal ritual and I hope to introduce the act to American students upon arrival back home!