My appreciation for Koblenz didn’t begin the first or second time I went there, not counting the first day I arrived in Germany. That’s why, this is a condensed post of my experiences in Koblenz. Koblenz is the closest city to Vallendar, where I live. Initially, Koblenz seemed to be a small, cute city. I thought, I would need a day to see everything.

Trip 1: The first time was a WHU event for exchange students “Koblenz Rally” where we took the train to Koblenz as a group. We broke into groups and were challenged to do fun tasks which also involved interacting with locals. The best one was asking a local to sing a German song with us. It was also a great way to get comfortable with traveling from Vallendar to Koblenz because on the way back we got so confused about taking the bus or train that we bought the wrong train ticket to go back. Luckily we got a refund and took the bus back to Vallendar.

Taking a Selfie with a “Local”

Trip 2: The next trip to Koblenz was 2 days later. I took the 5pm train to Koblenz station. I didn’t realize I could have taken the bus directly to the shopping area. I walked down Löhrstrasse into the shopping area and shopped a bit for my room and a sim card. I still didn’t know where to take the bus so I walked back to the station instead of getting on the bus in the shopping area and took the 8:20pm bus. I was sitting on the window side which didn’t have a good view of the screen with the stops. Everything was going fine, until I saw a grocery store and gas station and thought it was my stop. In my moment of being flustered, I got off! Turns out I got off at Urbar/Kanuheim instead of Vallendar Mitte, which because of the hilly area is still far from my apartment building. I tried to use google maps but since I didn’t have service yet, couldn’t use directions.  I had the bus schedule so the next bus was coming at 9:37pm. I had an hour to wait in the dark on a highway. I wasn’t scared because the area was safe, but there was no way to walk home. I went on an overbridge for pedestrians and while exploring that I realized it had a view of the Rhine River. So, I spent twenty serene minutes gazing at the water and the church. The rest of the time I was looking at the bus schedule and map. Soon enough, I was back on the bus to go home. After this experience, I felt pretty confident to use public transportation. 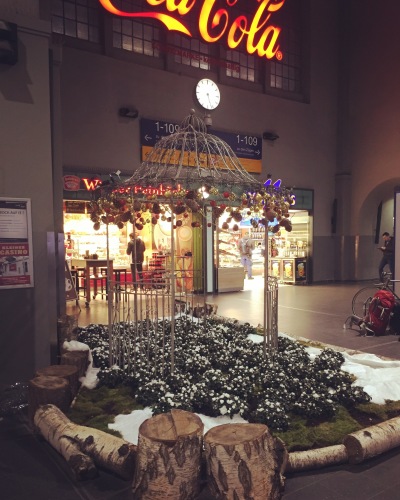 Trip 3: By now, I knew all I had to do was just take a bus to Koblenz. It was the best way to go to Koblenz, and the locals usually used it more than the train too. The next trip to Koblenz was 4 days later. I went with a friend; she’s also a master’s exchange student. We took the 5:07pm bus into Koblenz. We were just going to walk around and explore the area. It was a cloudy day and dark by the time we got to Koblenz. We got off at the shopping mall bus station and walked on the small streets with shops and window shopped. I got a delicious vegan thai pesto sauce from one of the shops and a cute paperweight from an artsy store. I was still trying to make my desk and room more homey. Soon, it started raining, steadily getting stronger. We walked to the Deutsches Ecke in Altstadt, which is gigantic up close. The Deutsches Ecke is a statue with a German emperor and an angel on a horse. Under the horse, there was an area to walk around, then steps that led down. It was dark and the water was moving fast due to heavy rains and high waters. We walked up the steps and saw the Mosel and Rhine rivers intersecting. I think seeing it in the night made it so beautiful and majestic.

View of the Rhine River from Deutsches Ecke

There were a few people running along the river. Seeing joggers made Koblenz even more city-like. It started raining harder so we went back to the bus stop, and went back back to Vallendar.

This time, I wanted a break from studying and planned to take photographs for the blog. I took the bus during sunset, so the bus ride was beautiful. Instead of going all the way to the shopping area, I got off at Schloss (Castle) Koblenz. I walked down Clemensstrasse to the riverfront and saw Ehrenbreitstein Fortress across the river. It was gold because of the sunset. I kept walking along the river.

15 minutes later I walked into Altstadt (Old City) with small streets and shops on Entenpfuhl Strasse among other small streets. I stopped at a bookstore and it had English books, so I bought an English book and a German children’s book. Being in a small town, I realized I needed something to read instead of watching TV.

Fountain in the square (Brunnen Am Plan) over 200 years old

Trip 5: The next trip came a week later because of piling school work, leaving less time to explore. I went with a few other exchange students, or in German “tauschies.” We couldn’t take the bus due to flooding near the bus stop, so we took the 1:05 pm (in European time 13:05) train to Koblenz. We walked to Altstadt, Old City, and had lunch specials at an Indian restaurant (perfect for a student budget). This was the best lunch ever! Even though it was a rainy day, it felt refreshing to walk around Koblenz. 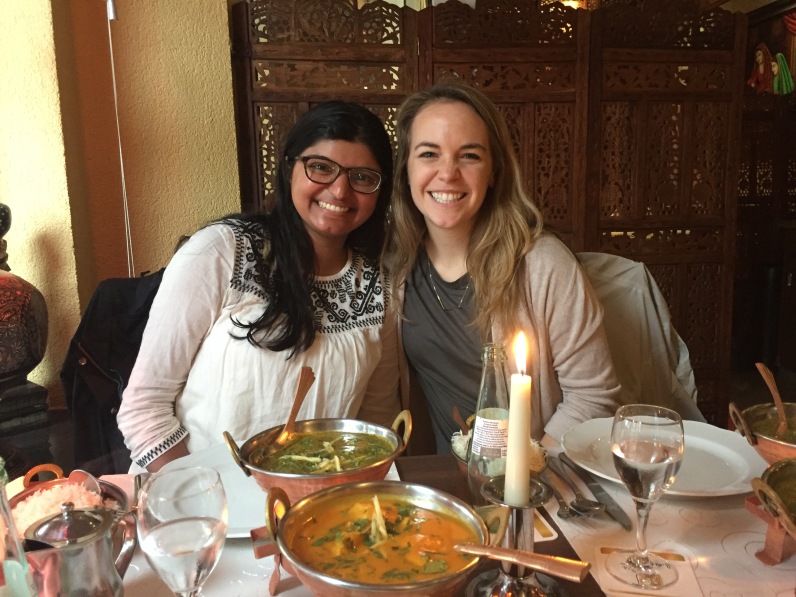 Trip 6: Going way too fast, January was coming to a close. My last Koblenz trip in January was on the 31st, a week after. Even though I went solo, this trip was so much fun. The best part though: I activated my German Rail Pass and booked tickets to Berlin at the main station. Afterwards, I went to Altstadt and bought a book and postcards. I was so comfortable with Koblenz and loved walking around. Also, I was going to BERLIN. This would be my first trip since I came to Vallendar.

Every trip to Koblenz was its own adventure. Koblenz has become a part of my study abroad experience just as much as Vallendar.

I am studying abroad in Vallendar, Germany as a MS exchange student. Looking forward to studying hard on weekdays and adventuring on weekends. :-) View all posts by Jignasha Adhuria