I had no idea what a Yorkshire Pudding was at all either. Once arriving in York, everyone would ask me if I had had one yet and that they are the best thing ever. I guess they are pretty good!

Before we move forward, I need to tell you something. Yorkshire Pudding is not pudding. Not in any way is it related to the pudding that you may be accustomed to in the U.S. The “pudding” that I am referring to is this large, bowl-shaped, flaky bread type thing that is usually served with a “roast” (a roast is usually served on Sundays. It is very similar to a traditional Thanksgiving Day meal, but with more options for meat). I have no idea why they call it a pudding, but I can’t really complain because they originated the language… Just kidding I still roll my eyes every time a Brit calls a French Fry a chip, so I am not surprised they would call something like this pudding.

The origins of the Yorkshire Pudding are not exactly known, but the first recorded recipe dates back to the 1700s. The enormous success of this staple British cuisine is due to the fact of how its made. Cheaply! The way it used to be eaten was that the pudding and veggies would be served first to the family. When that was eaten up, the meat would be served. They family would get full off the pudding and consume less meat. Although the puddings look flaky, they are actually pretty dense. The family would save money on not having to buy as much meat and because the pudding itself was super cheap to make. It was just a win win for everyone!

Fast forward to today, people still love them! Not just known as an economical meal anymore, the Yorkshire Pudding is eaten across the UK as a staple for British food. If you’re ever bored and want some entertainment, ask two Yorkshire people who makes the better Yorkshire Pudding. BAM! Free entertainment (similar to asking Philadelphians who has the better cheesesteaks). You’re welcome. Yorkshire people are known to get into heated arguments on who has the better recipe because everyone claims that theirs is better than the next.

Front of the Yorkshire Pudding Wrap place! (You can see the line inside though the window)

Now I need to tell you another thing. I have never actually had a “proper” Yorkshire Pudding… I know I know “Why would you be writing about something you haven’t even had, Kyle?” Well, I have had a Yorkshire Pudding WRAP (Crowd goes “oooooooooo”).

He is making a sandwich, but there is a flattened Yorkshire Pudding to his right

A Yorkshire Pudding Wrap is when they take the pudding and flatten it in a sandwich press. After that, they add all the ingredients of a typical roast into the pudding and wrap it up. Oh my it’s delightful (I really want another one now… Don’t write when you’re hungry, people).

After a day on the town, a mate and I arrive at the pudding wrap place. The line was wrapped around inside and spilling out into the outside, but after everything I have been hearing, that line was worth it. After a painstakingly long forty minutes, we finally got our pudding wraps and head upstairs to devour it.

Let me just tell you now, it was AMAZING. It was exactly what I imagine Thanksgiving to taste like if it had a taste. It had the perfect portions of gravy to meat to veggies to stuffing. Literal perfection. It got me stuffed and that’s a difficult task to accomplish. 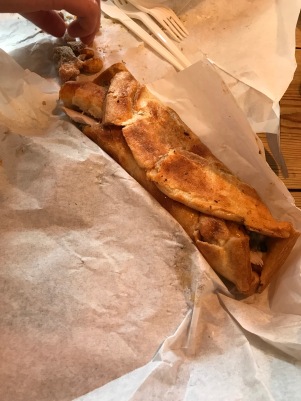 In the end, if you ever go to York, or the Yorkshire county in general, promise yourself to have a Yorkshire Pudding. Mark my words, you will not regret!