The second school activity I participated in as a Hanyang International Summer School student was the boat cruise.  From the Jamsil Pier, we all piled onto the boat to cruise along the Han River and take in the sights.

(the pier, welcoming us)

Originally, the boat cruise was set for the first week, but because of the typhoon season, the water levels were too high to set sail.  Unfortunately, this meant that I had the boat cruise the night before the midterm negotiation that I needed to prepare for (we did not get our assignment until that day).  I thought about skipping, but I needed to pay a 50,000 won deposit beforehand and if I did not show up to the activity, I would not get that money back and would be barred from any future participation in activities.

There were a lot of students at this activity, probably somewhere between 100 and 200, so there was a lot of waiting and queueing to walk to the place, get on the boat, get food, etc. The school provided us with hotdogs to eat before we boarded (that, unfortunately, were not hot) and fried chicken to eat on the boat.

I was really excited to go on the boat cruise to see the night skyline, but I was also a bit worried that there would not be much to do.  A few of my friends went on the cruise the day before me and told me that it was too long and not that much fun, especially when everyone started dancing (if you do not like to dance). 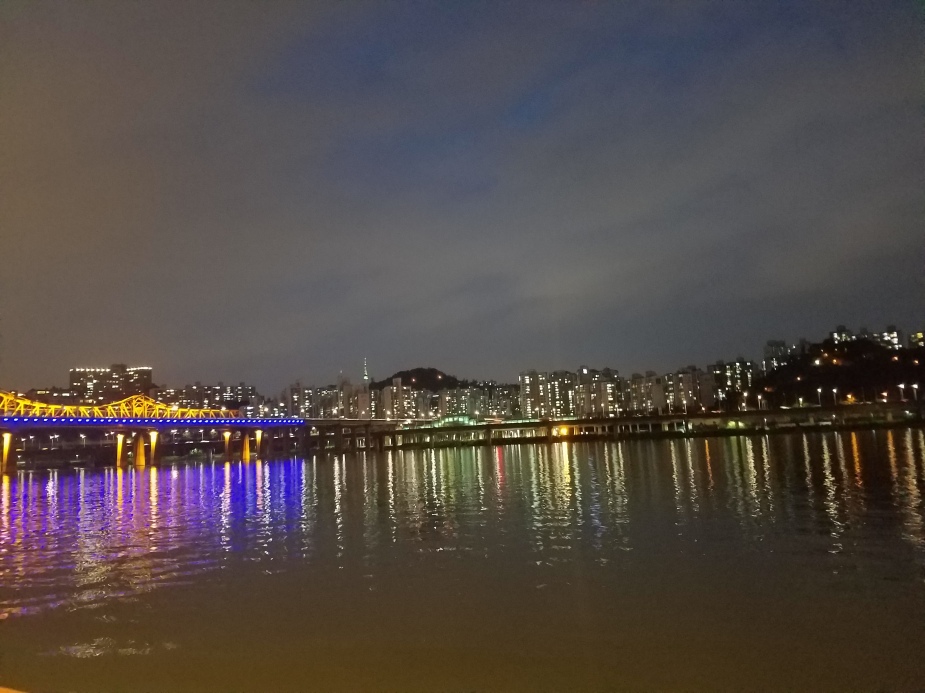 However, I was pleasantly surprised by the number of activities.  On the lower deck, they had two performers sing and play instruments.  I especially liked the live band covering some K-pop songs, as it was nice to hear acoustic covers.  After the performers finished, they opened up the area for dancing.  With loud music and strobing lights, it seemed like a lot of fun for those that like to dance (not me).  On the upper deck, they had face painting and henna tattoos.  There was also some arcade-style games such as darts.

Not knowing anyone who was going to this activity, I was quite nervous that I would not have a good time.  Luckily, I did meet someone and I just enjoyed talking with her and soaking up the views.  No extra activities required to have fun.

All in all, I felt like the cruise lasted for a fair amount of time.  We had to leave our evening classes early (around 6 pm) to make it to the pier by 7 pm.  Boarding took a while, as the boat left at 8 pm.  We were back to the pier at 10 pm.  By 11 pm I reached my dorm, cracked open my book to start preparing for my midterm.

Second-year marketing student excited to adventure around Seoul at Hanyang University for the summer of 2018! View all posts by Minel Cannucciari