The instructions were simple. Exit the Lyon Saint-Exupéry airport, find the Rhône-Express train, and get off at the Part-Dieu stop. Charlotte, my French friend, had explained it all to me. “I will be waiting for you there,” she said. “It will be easy to find each other!”

There was just one small oversight: it was all French to me. 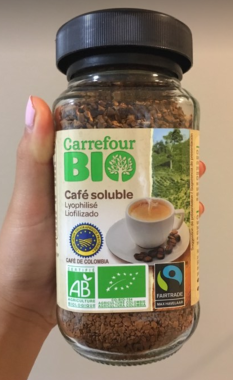 I got so desperate for caffeine that I purchased instant coffee from my local Carrefour, which is similar to a Walmart. I regret this decision immensely and will continue to search for a good coffee shop.

Indeed, as soon as I stepped out of the terminal into the 34°C heat, I realized I was not in Philly anymore. Over the next few days, I learned that despite learning French for five years, I could barely purchase a pain au chocolat without linguistic barriers. Good Asian food has yet to be discovered, and there were no coffee shops within a mile of my university campus (R.I.P. Saxbys, I miss you dearly!).

It started to set in around day three, when I was in the supermarket trying to buy groceries. It was a strenuous task to read all the labels, and I think I actually lost it when I couldn’t find soy sauce. How could they not have soy sauce!?

But, in all seriousness, the culture shock was very tangible. It takes a great effort to adapt to a culture and language I’m foreign to, and there are days where I don’t speak much because constantly translating my thoughts and ideas is simply exhausting. Like Americans, sometimes people here speak very quickly or use colloquiums I’m not familiar with. Not to mention that I miss my friends and family as well, and I know now that I took many things for granted. Even little things. There were so many days I was too lazy to go to the gym, for instance, but here it takes 20 minutes of public transport to get to my gym (which is the size of half a floor of the Drexel Rec Center, for which I also pay 65 euros a month). I know it’s going to take some time to adjust, though, so I’m not worried. Because in reality…

I’m so happy to be in Lyon!

To avoid gushing about the reasons why I’m so in love with this city, I’ve decided to compile them into just two bullet points for now.

From the Basilica of Notre-Dame de Fourvière to Vieux Lyon, Lyon is a prime location for some fascinating sights. The only other place I’ve seen Lyon’s winding, sloped streets is in Quebec (which kind of makes sense). I spent an evening with Charlotte climbing these little alleys up to an area called Fourvière, which includes the basilica and overlooks all of Lyon. I wasn’t able to capture a photo of the entire city (iPhones are terrible at taking night photos), but I did capture one of the basilica.

Once I explore more and the city and take more photos, I’ll be sure to post more about them. But overall, I’m thrilled with the historic sites and beautiful buildings Lyon has to offer. 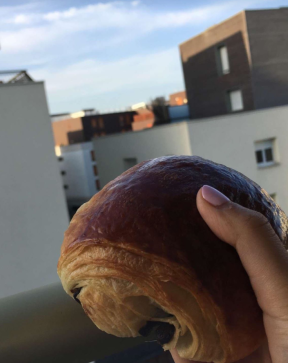 A chocolate-y, delicious start to my morning!

As someone who loves spicy, Asian foods, I will admit that the cuisine here isn’t my highest preference. But it’s quite good. I love waking up at 8am to head over to the local boulangerie, where I always pick up a pain au chocolat. Boulangeries are bakeries that sell bread, sandwiches, pastries, and viennoiseries (which are flaky pastries like croissants and pains au chocolat). The pastries are very affordable, costing somewhere from 1-3 euros.

I’ve only dined in a formal restaurant once, where Charlotte treated me for lunch. I don’t recall its name, but the restaurant did serve a delicious, buttery fish (see picture). It’s not the kind of thing I’d expect to enjoy. I don’t really love fish, and I’m big about seasonings. The dish was still absolutely amazing, and I think I understand why people adore French cuisine so much! The meal also included a salad and a dessert, and only came out to 19 euros. 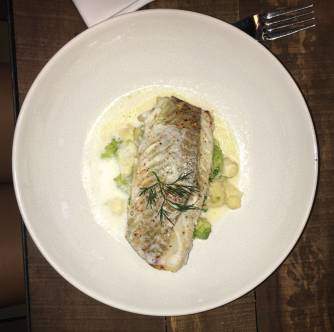 Over the past few days, I’ve been working on cooking my own French cuisine in my dorm kitchen. Once they’re actually picture-worthy, I’ll definitely share them with everyone!

Overall, my time in Lyon so far has been a huge learning experience. The immersion of truly living in a foreign culture is impossible to describe– I’ve learned so much that I would have never realized from simply taking a course or watching French movies. My speaking and comprehension abilities aren’t great yet, but they’ve improved drastically. I’m so excited for what’s to come!

View all posts by Beverly Zhuge