Fall break just ended for us (more on that to come) and unlike some of my other travel experiences, it was not smooth sailing. There was a strike in Brussels airport that caused many flights to be canceled- including mine. This ended up with me missing out on Barcelona and the cool things to see there. It also meant that I had to travel 14 hours to get somewhere that takes only two hours by plane. Follow me through the unfortunate series of events that would eventually end in Barcelona… 14 hours later.

The night before my trip, I was full of excitement and procrastinating on packing. I had just gotten back from Romania and I was understandably tired of packing and unpacking bags. My flight was originally supposed to leave at 9 AM so I was planning to wake up 6 AM to head to the airport. Imagine my surprise, though, when I got an email stating my flight had been canceled.

I shouldn’t have been shocked, since the strike had canceled flights the previous day as well, but I had hoped that it would be over or simply not affect mine. At this point, I’m in full blown panic mode, scouring the internet for a new flight only hours before I would be getting on it. They had all significantly increased from the 120 euros I paid to the 400-800 range. Impossible for me to fork up that money.

After an hour or so and a lot of randomly clicking on websites, I managed to find one for 127 euros! A little more expensive yes, but it was a miracle I was even able to find one at that price. The downside? It was leaving from Paris, France. I am decidedly not residing in Paris currently so that meant a trek over to the hexagon was in order. Luckily, Kiwi, the booking site, bundled the transportation to Charles de Gaulle with my plane ticket. I highly recommend Kiwi, it was such a steal and the app was amazing with organizing all my bus and flight info/boarding passes.

Despite Paris being a short two hours away by train, I had to take two different buses to get there. My first bus took me from Brussels Airport to Lille, France. I had a two hour layover and the train station was under construction. I couldn’t stand outside as it was absolutely freezing and also raining. Through the glass windows, I spotted a Carrefour and Primark across the way. I made my way over and was in absolute shock to find one of the biggest malls I’ve ever seen in my life. Had I not been holding all my luggage, I would’ve snapped a pic. I ordered a crepe and hung around for a bit before the bus to Paris arrived.

Paris took a little longer to get than Lille and I had hoped that I might be able to see a little something of the city on our way to the airport. But alas, Charles de Gaulle is in the middle of nowhere and I saw nothing but farms. I did see this nice rainbow, though. 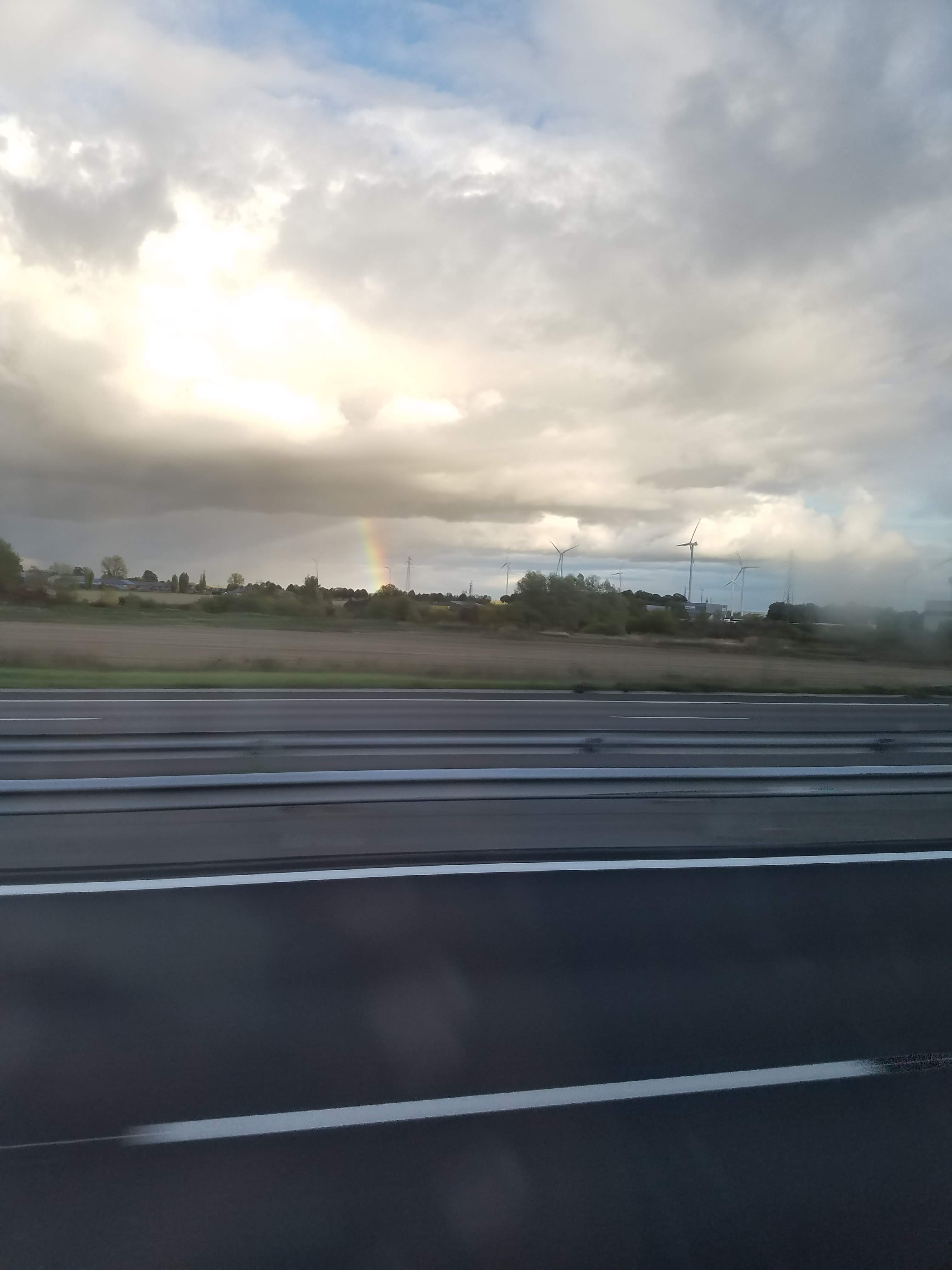 The airport was my least favorite part of this saga. I was stuck in Charles de Gaulle for five hours waiting for the plane to come, one of which was due to it suddenly getting delayed as we were all lined up at the gate waiting to board. When it finally showed up I was relieved that it was almost over and I fell asleep immediately.

I woke up as we were descending over the Mediterranean and landing at the Barcelona airport. Similar to the one in Munich, it was like an impressive mall that also had planes. It took me a solid 20 minutes to find the exit because of how big it was.

Stepping out into the parking lot, I hailed a way too expensive taxi to my AirBnB where my friends were waiting and got my vacation started!

Even though the travel was way more of a hassle than I thought it would be and I ultimately saw none of Barcelona due to this, I learned a valuable lesson: when traveling ALWAYS plan for the worst. My friends flights had actually got canceled the day before mine and I even helped them look up new tickets. I definitely should have expected mine to be canceled next and bought them ahead of time. Would have saved me some time and maybe even some money!

I also learned, though, that even if it’s not the adventure you wanted, all the fumbles in your travel experiences will still make great stories.