I’ve mentioned a few times that I’m a French immersion student. I’ve been learning the language since I was four years old and have grown up learning about France, especially Paris, without ever having seen it. I missed out on an exchange trip when I was in middle school and have always regretted that. So, I knew before I even came here that I would be paying a visit to Paris. It wasn’t my intention to make it the final trip of my study abroad experience but I think that is fitting.

Paris is surprisingly small and though we didn’t hit every famous landmark, we managed to knock off quite a few. Some we merely saw from a distance (the massive Sacre Coeur is visible from far away) but we saw a good amount of them up close. Here are some of the places we managed to hit in just two and a half days.

Fun fact time! Every Friday night from 6PM to 9:45PM, you can get into the Louvre FOR FREE if you’re under 26 years old. That is amazing for several reasons. First off, the Louvre costs 17 euros to get into normally so you’re saving money. Second, the lines for Parisian museums are actually ridiculous. However, you’re cutting out a gigantic swath of people by going late at night and also limiting the age of people who are going in. I highly recommend doing this if you are in Paris on Friday night. You walk straight in, no line at all and have a reduced crowd size so you can take in as much as you want at your own pace. 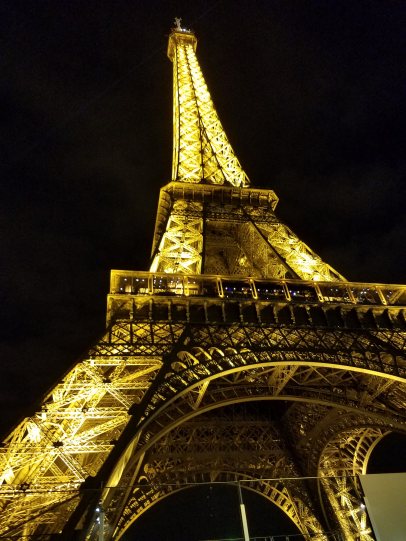 I’m not going to lie, when I got out of the metro and saw the Eiffel Tower peeking out from behind the buildings, I nearly screamed. On our quest to reach the famous landmark, we passed a ton of other famous things but I was most excited about the Eiffel Tower the whole time (seriously, everything is so close together in Paris, I was really surprised!). If you didn’t know, the Eiffel Tower has a light show every hour and we got to see it twice! The first time, when we finally had it in full view, the light show started (a magical moment). The second time was when we finally made it to the base, so we got to see it up close. Honestly, the hype is well earned.

On the way to the Eiffel Tower, we found an entire Christmas Market by the Tuileries, a famous garden in Paris. It was full of shopping and traditional French foods, to the point that we walked through the entire thing twice before actually settling on what to eat. It was a feast in more than one way!

My friend that I traveled with is a dancer and mentioned wanting to see a ballet. I remembered that there was a famous venue in Paris, Opera Garnier, and suggested we go see it after heading to Galeries Lafayette. To our surprise, they’re literally right around the corner from each other! You have to see this place in person. If we’d had more time, we would have bought tickets to see Cinderella, but we still managed to walk around (it costs 7 euros for students to enter for an unguided tour). It was like being in the castle from Beauty & the Beast. So stunning! I’m adding coming back and seeing the Nutcracker to my bucket list items.

A friend of ours who had visited Paris the weekend before told us we had to come to Galeries Lafayette to see their Christmas installation. She wasn’t kidding! It was very beautiful on the inside, with all the lights and stained glass. The mall is filled to the brim with luxury brands that I couldn’t even afford to breathe on but the top floor had a bookstore in it. I picked up a limited edition version of Le Petit Prince, one of my favorite books, for 11 euros to commemorate the trip. The very top also has a terrace where you can get a view of Paris! Even if you similarly can’t afford much of the items inside, it’s still well worth the visit.

We chose the best weekend to come to Paris, as we were there for the first Sunday of the month. Another fun fact! The first Sunday of the month is free museum day, so we decided to come to Musee D’Orsay. A former train station, it is now home to some of the most famous paintings in the world, and is second only to the Louvre in terms of popularity. We saw an entire exhibit on Picasso’s blue and pink periods and Van Gogh’s self-portrait, amongst a ton of other super famous pieces. All for free! It was a great way to spend our last day.

Paris was an absolute dream come true. I had mentioned to my mom that I wanted to live in Paris for a year to improve my French and this visit only solidified those plans. If you ever get the chance, pay a visit to the city of lights!