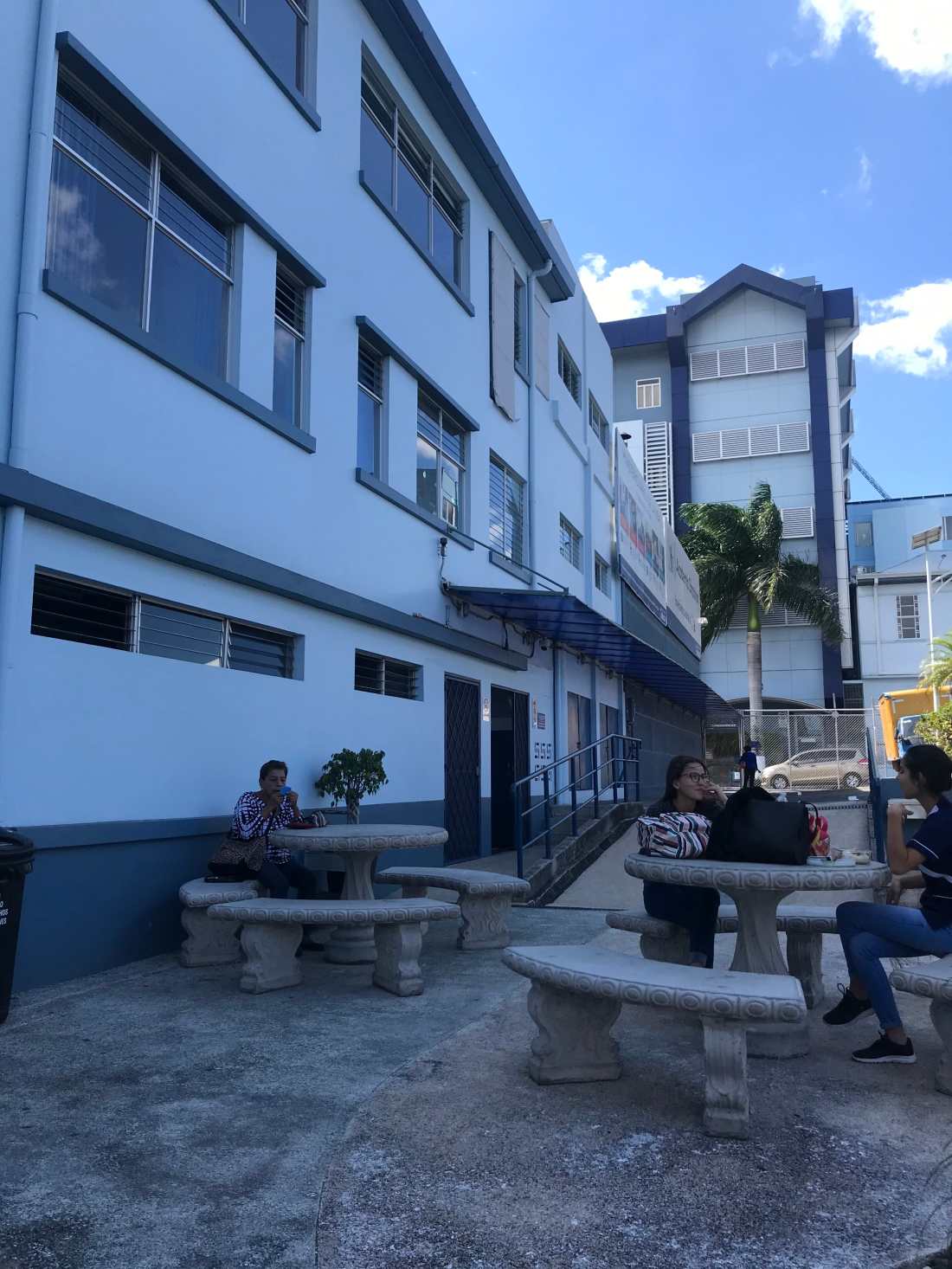 Hola! Real quick, the featured photo is a picture of Clinica Biblica (the hospital where we have a lot of classes) from the courtyard! Anyway, today was the first day of classes and wow I’m nervous but excited to explore San Jose and get to see what my classes are all about. Last night, my Mama Tica told me that breakfast would be at 6:30AM so we could leave at 7AM to catch the bus to La Clinica Biblica, which is where we have a majority of our classes which start at 8AM. I have never had a class at 8AM in my life, so I was exceptionally nervous that I would sleep through my alarms. Luckily, however, I did not and I woke up on time and my Mama Tica and I walked to the bus stop. The buses in Costa Rica are different; there is no schedule, no signs indicating routes, and the buses have few signage on the front that dictates which route and what stops they are taking. Also, the bus driver actually like, counts change and rearranges the money while driving and it was so cool to me. I include a picture of the bus driver counting the change below! And like, the traffic and driving has way fewer regulations than in the United States; like almost no stop signs, few traffic lights, and people just drive however they please, it’s very interesting. Thankfully, mi Mama Tica showed me the way and I got to La Clinica Biblica at 7:50AM. I had my Healthcare in Latin America and Vulnerable Populations classes and then we had a two hour break to return to ULatina for our Spanish class. During these two hours we decided to get lunch at La Pataconeria which sells Patacones which is Spanish for fried plantains. Wow. Who knew friend fruit could be so delicious paired with chicken and red salsa. The food places in Costa Rica are so much more culturally significant and cheap for a good meal. I spent 3,000 colones (about $6) for a meal that genuinely filled me up and was delicious. I have attached a picture of my meal for reference! This is a great transition to talk about the Costa Rican food scene that I have experienced so far.

Basically, I have only eaten out at one restaurant. Once I eat at more, I will fill a following blog with all the best food and locations and the preparation process etc. So, every night my Mama Tica cooks dinner for my Papa Tico, my host uncle and host aunt. They are all lovely people and my Mama Tica is a fabulous cook. It is the culture here that everyone sits down for dinner and eats together, like it is rare (at least in my family) that we go out to dinner or get take out because my Mama Tica is a great cook and it seems as though my family is very content having her cook dinner instead of going out. A lot of the food consists of rice and beans (arroz y frijoles), as that is sort of a staple of the Costa Rican cuisine. A good example of this is when I arrived at their house from the airport, the first thing my Mama Tica made were pastry like things, one con frijoles y queso (beans and cheese) and one that my Mama Tica called dulce, which just means sweet. The following nights we sat down and had dinner together as a family. The meals were delicious and always consisted of a meat, rice and beans, salad, a fresh juice and some sort of vegetable. It is strange to me to have this setup every night, because normally for dinner at school I am cooking something for myself (more often than not it’s ramen or spaghettios with canned veggies on the side). Even when I lived at home with my parents, we all had busy lives – my dad works until 6PM, my mom has work until 4PM and was a basketball coach at night, I played lacrosse and worked a job and my sister played soccer and basketball on top of school and schoolwork. We rarely had time to sit down and eat as a family, let alone prepare an entire meal with sides from scratch. Family and time together is valued higher here than in the United States and while I’m not used to it, it’s definitely a great dynamic. If my family did it, I wonder if we would have more open communication like my host family does. Anyway, I hope this gave you a basic look into the eating habits of the ticos y ticas of Costa Rica. I will definitely write more blogs based on food, because it’s always so delicious here! Adios for now!

View all posts by Maria Sims