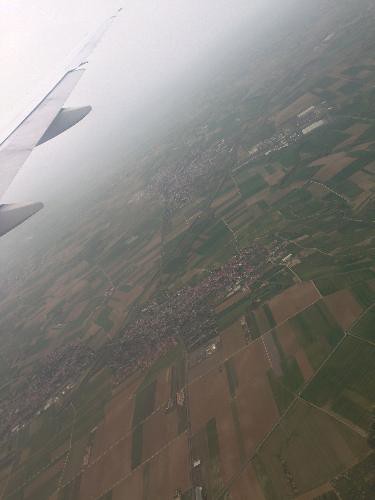 I had some troubles getting my internet to work on my laptop therefore these first few posts are delayed a few days, but I will soon be caught up and telling everything as it happens. But now, I’m finally starting to feel at home here. My first few days in the country I did your typical touristy things, but now I really feel like I’m a part of something here.

As I walked off the plane I was very nervous about speaking very little German. Fortunately, all of the signs and announcements in the Frankfurt Airport were made in both German and English. I then had to find my way to the train station and catch a two-hour train to Bochum. This is where I started to see the language barrier. The farther away from the airport I got, the fewer English signs there were and it became less obvious as to who did and did not speak English. I came here completely unprepared, which I would really recommend not doing. At least take the time to learn a few phrases and important words so you can get around in the very beginning. However, I was still able to make my way to Bochum fairly easily.

After being escorted from the train station to Ruhr Universität, I met up with the rest of the Drexel group where we were eagerly greeted with a warm welcome by the Ruhr staff and students in the international program. It was nice to see that everyone made it there safely and we were all very anxious to get out and see Germany right away, but for the time being, it was time to find our rooms in Europahaus and get settled in. I walked in to a dark room, flicked on the lights to see a very nice student apartment consisting of 3 single bedrooms, two bathrooms, a kitchen, and a common area. When I arrived neither of the other two roommates were home, which felt very weird walking into their house when no one is home. I really wish that I could be been informed on who my roommates were prior to leaving the states so I could find them on Facebook and get in contact with them beforehand rather than walking into an empty house feeling like a stranger.

Shortly before we had planned to venture into the city of Bochum, my first roommate got home and we briefly got acquainted. I realized that he had nothing planned for the night so I suggested that he come out with us, which turned out to be the best thing to happen. That night he took us to a street in Bochum known as Bermuda Dreieck, or Bermuda Triangle. This is a stretch of road filled with bars and restaurants, providing a very nice nightlife. Our first stop was a bar called “Brinkhoffs” where we all shared our first authentic German beer together. My roommate, Oktay, was able to give us many suggestions based on his experience of growing up in the country. He also introduced us to authentic German Bratwurst at the Bratwursthaus where we tried bratwurst mit brötchen, or bratwurst on a roll, and Currywurst with fries and mayo. Yes, mayo on fries, it sounded very strange at first but their mayonnaise here tastes much better than in America and it actually went very well with the fries and even better mixed with ketchup. Moral of the story, don’t be afraid to try new things. Spending time in another country is all about exploring and trying things you might not normally do; after all, this is a once in a lifetime opportunity.

After this we made the choice to go back home and get a good night rest before visiting Köln (Cologne) in the morning. It certainly was not a bad way to start out our first day here.

The photo attached is of my first view of Frankfurt as my Plane began it’s decent into Germany.