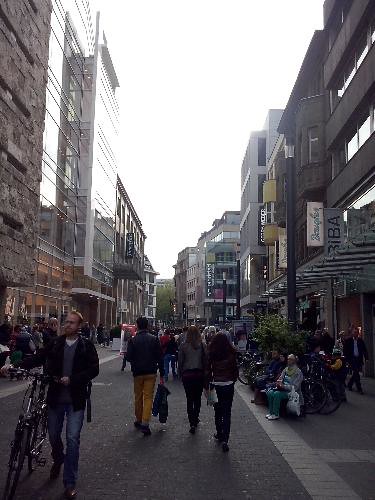 Entry III: The Language Barrier
Living in a foreign country can be challenging especially if one doesn’t know the native language of that country. I, for one, am not a native speaker I German, nor have I previously studied it in an academic setting, and only a few months before my arrival did I begin learning: having taken a few online lessons using a popular free online learning course. Before that I knew little more that “Guten Tag”(Good Day) and “Nein” (No). However, I have met many German people outside of Germany, all of whom spoke English very well (this probably being due to the fact that they were all outside of Germany), which gave me a sense of comfort in the expectation that most people would speak English, thereby removing the difficulty of a language barrier. I also felt confident in my communication abilities to people of “foreign” countries (foreign being in quotations because they are foreign to me, but if I am in their country, I am the foreigner), after living in China for the past six months, where relatively few people could speak English. What I did not expect was that communicating would be even harder in Germany than in China, at least in the beginning. In an unexpected revelation, this happened to be the case, all due to a very simple fact I failed to take notice of before arriving. This fact being that I do not evidently look like a foreigner as I did in China, making it perfectly logical for someone to assume I, being of European descent and being in Germany, would have the ability to speak German. This obvious fact came as a surprise to me, and although most people have the ability to speak English, it was not as easy to communicate with them as I had thought it would be, only because I would have to respond with: “kein Deutch” (no German), or just as well “sorry, I don’t speak German”,at which point most people would make an effortless transition into the language I best understand as if it were all the same to them. While a little bit disorienting in the beginning, I have now learned to use this phenomenon to my advantage, by trying to get through as many social interactions as possible without letting anyone know I cannot speak German, in order to test my comprehension of the language (now that I am taking an intensive course) and also, to practice speaking, if necessary (although usually I can listen and not reply but with a mere “Danke” or nod of the head and smile, when buying something, for instance). With this strategy I anticipate to be at a fluent level by the end of my ten weeks here at RUB (am I joking? I guess you’ll just have to wait and see).

Photograph above is a street in the old city of Düsseldorf, featuring shop signs in the German language.

As a side note, I would like to take this opportunity to introduce my video blog, which may be complementary or unrelated to each respective written blog entry, but either way worth a gander, in my opinion. https://vimeo.com/channels/718092