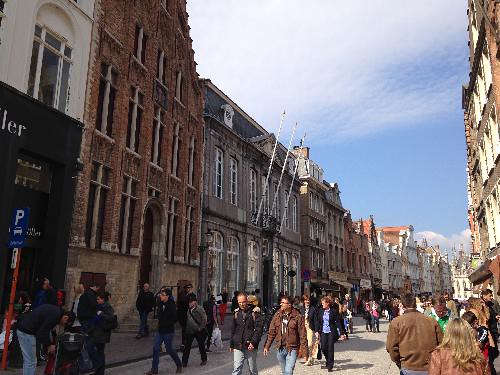 On the second day of our 4-day weekend, we went to Bruges. It is a city close to Brussels and is very beautiful. As with Brussels, the first thing we did was go to a tourist booth and got a map of all the attractions of the city. We made our own tour to make sure we saw most of what the city has to offer. It is a much smaller city, but it is very beautiful because of its canals, castles, and open square. It probably has a lot of history, but we were unfortunately not prepared enough and read nothing about it.

The following day, we went to Amsterdam. The first thing we did was take a boat tour through the canals. The whole city is built on canals, so there are bridges and boats everywhere. We stayed at a bed and breakfast on a boat. It was very tiny, but pleasant.

The next day we rented bikes in the city. That is the main source of transportation there. They are so popular that there are even bike parking lots! We rode around the city and got the true Amsterdam experience. We then to the Heineken brewery and took one of their tours. It is interactive, so we actually found it very interesting. They even gave us free beer to try.

On the way back from the brewery, I had trouble getting my bike unlocked. It got entangled with the other bikes, so I put my bag down to try to rip it free. A friend of mine started to help me, and after a few minutes of struggling, we finally got it. Unfortunately though, in those few minutes my bag got stolen! Luckily I still had my purse with me which had my wallet and phone, but everything else was gone! That included my clothes, my iPod, my charger, all of my overnight things, and worst of all, my passport! Luckily I still had my phone and wallet because it was in purse, but losing a passport isn’t the best thing I can do in another country, especially since we had to catch a train home in an hour!

We found out where the police station was and rushed over there to try to make a police report of the stolen bag. They wrote down my information and said that they would call if they find it. I was very upset, but there was not much else I could do. Since the Netherlands are a part of the EU and have signed the Schengen agreement, I did not need a passport to cross the border. That made things a little easier.

On the ride back, there was another delay on our train because of another suicide! I don’t think that is a common thing in Germany, but it happened to us twice. We were not late for our connecting train this time, but this will make us more cautious for the future.

Overall the trip was great! I would have been happier to not have had all of my things stolen, but it could have been much worse. I have to remember to stay positive.

The picture uploaded is of Bruges.