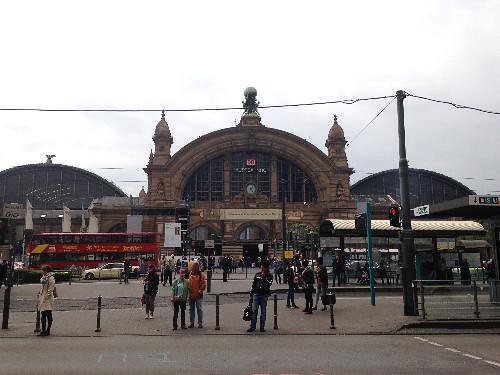 Since my passport was stolen, I had to go to the US Embassy to file for a new one. There was an embassy in Dusseldorf, which is really close to here, but it no longer accepts people. That unfortunately meant that I needed to go all the way to Frankfurt. It is only two and a half hours away, but the appointments are at 8am so I needed to leave at 4am. Additionally, the only train available that early was a very expensive one. I could already tell this was the beginning of a frustrating trip.

I was right. First, my alarm clock did not ring. I woke up at 6am and realized that I missed my train. I decided to still try to go down there and hoped that they would take me later. I got on a series of trains, and I luckily did not have to pay extra for missing my first one. I called them from the train and they said that coming a couple hours later was not a problem. Whew!

Once I got to the station, I was not sure how long it would take to take the subways, so I decided to take a taxi. Wrong choice, it cost 45 Euros for a twenty minute ride! It was expensive, but it was better that I got there earlier.

Once I arrived, I saw a police man outside. He said I needed to put my phone away, so I put it in my bag. He then said that the embassy will not store my bag. I could not understand what he meant by that, and it did not help that he was German. He told me I could take my bag to the kiosk a few blocks away to store it, and then I understood that I was not allowed to bring it in the embassy! The rules there are stricter than at an airport. I left the embassy, found the kiosk, and had to give them all of my valuables.

I then came back and waited in the line to speak to a representative. I already had all of my paperwork so I figured it would be quick. Wrong again. It turns out that the envelope I bought at the post office was not the correct one. I apparently needed to buy a special prepaid envelope that was available a few blocks away. Again, I had to leave the embassy, find this store, and come back to the line. It was not busy, but this back-and-forth nonsense was frustrating.

Finally they let me into the building to wait for another representative. The woman was very nice and the process took about an hour (and cost another $135). She said that I should get it in about 2-3 weeks, which is great news! I am waiting for it in the mail now.