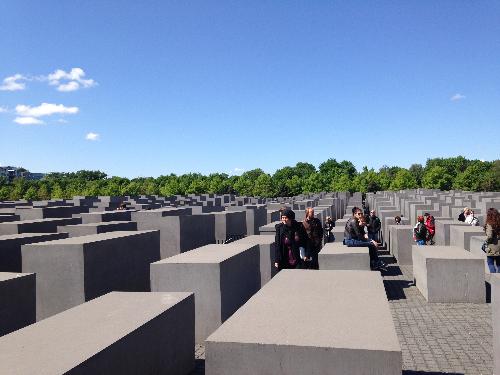 The past weekend, a few others and I made a rash decision and decided to go to Berlin for 2 days. That is not a very long time to go to such a big city and buying tickets last minute is never the cheapest option, but we still decided that it would be a great idea–and it was. We took one of the fast trains without any transfers so the trip only took us 4 hours. We were there by 10am! That was a success in its own, since the cheaper trains would have taken away half the day.

Before going, I looked a bit into the area and found a free tour of the city, you just have to tip the tour guide. It is a great system! And apparently, this company does it in many other big cities. I’ll definitely look into it for our future trips.

The tour guide was amazing! He was originally a History teacher from London so he spoke English well and knew so much about the history. He truly made us fall in love with the city. I did not realize how many historic events took place there during the wars, especially since it used to be the capital. He showed us many of the main memorials and buildings, and connected everything with a story, which made the experience so much better. The coolest things we saw were the Jewish Memorial and a random parking lot. The Jewish Memorial was interesting because it was just a big field with different sized stones. There was no signs pointing to the memorial, there was no explanation about what it meant, and yet it was a very emotional place. The architect purposely did not give away any information so that people were required to think about its meaning and actually look into the history. It’s an interesting approach. Apparently, there are 2711 completely unique stones. This can resembles the graves of all the individuals who died, or the ghetto communities that were taken over, or many other interpretations that have aroused. I thought it was a cool idea. The random parking lot that I was talking about was actually the location of Hitler’s death! His bunker was concreted over and made into a parking lot. I think that is a very interesting way to deal with the brutal history. Berlin really does not hide the atrocities that have taken place in the city: there are many memorials, and signs, and reasons for people to get educated. And yet anything that has to do with Hitler is more hidden. We were told this is so that any Nazi followers that may still be around do not rally and worship his memorial. Hitler does not even have a gravestone, he was just cremated and his ashes were tossed into a river.

The next day we decided to do another tour, a paid one this time, about the Nazi party. It was very interesting also and did a great job describing how it was possible for so many people to follow such a crazy man.
Overall, it seems like 2 days is a very short time, but with the tours, we felt that we covered much of the history and locations and truly made the trip worthwhile. I will definitely try to do more tours in the future.