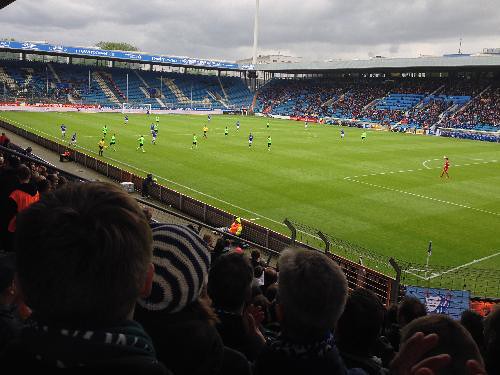 This weekend I had the opportunity of attending my first European Fußball game. I’m really not very into any specific sport in the states, let alone European fußball, but I told myself I would never turn down new opportunities while in Germany.

One of my roommates, born and raised in the Bochum area is a huge Bochum fußball fan. He has their jersey, scarves, shirts, you name it, he just loves them. Unfortunately, they are not the best team, almost every game he has attended this season ended with their loss. He kept asking me to go, but I really did not have that big of an urge to attend.

Earlier this week he told me that their final game of the season was coming up so I figured I might as well give it a shot. I threw on my blue and white and headed to the stadium with him and a few other students. Not being a die-hard Bochum fan, I really had no preference as to who won, at least not at first. As soon as I stepped into the stadium and heard the roaring of the blue and white crowd, I immediately got pumped up for the game.

I always pictured soccer as a very boring sport mainly because they are known for having extremely low scoring games, however this is far from true. Despite the fact that not many goals are scored, there is always action in the game. Seeing how the players maneuver around each other and make attempts to score blows my mind. After seeing them constantly running at a fast pace, spinning around opponents, and diving through the air to gain possession of the ball, I have a whole new respect for these players. By the time half time came, after the first 45 minutes of nonstop play, the score was still 0-0, but that was okay because I was enjoying myself just how it was. However, much to my surprise, shortly after half time, Bochum scored the first goal with an incredible corner kick that curved into the goal! The crowd went wild and I even found myself cheering for a team that I previously had no real attachment to.

The final half of the game went by with just as much action as the first. Every save that the Bochum goalie made brought more and more life to the fans. Before I knew it, the game was almost over and Bochum was still up by 1! Once the clock ran out and Bochum had officially won, the fans cheered louder than ever, threw confetti, and chanted together. It is reasons like this that it is never good to just blindly turn down new experiences. I’m definitely glad that I decided to attend this match and now I can say that I witnessed Europe’s favorite sport in action!