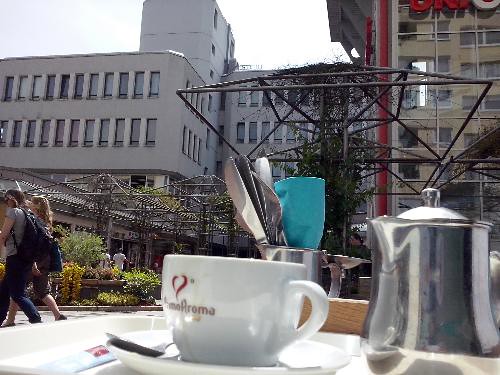 Living in Europe is dangerous. No not in the way you might be thinking, like west-Philly at night dangerous, but dangerous because if you come, you may never want to leave. The first time I was in Europe, I was here for only two weeks. I flew from my last stop—Venice—to Bejing, where I completed my second co-op. Not only did I have an unforgettable two weeks, but the experience somehow stuck with me, leaving me with a constant longing to go back. This feeling was most likely intensified by the extreme contrast of Beijing—fast paced, dirty, rude, and most of all, completely foreign to me. But it was prominent nevertheless for a long time. It did eventually wear away after some time, but now that I’ve in Europe again, I’m beginning to notice this feeling once again. Despite the circumstances being completely different this time around—studying rather than vacation, being stuck in a small city most of the time, and Germany itself, being a country I’ve never been to nor have had any previous connection to—I believe that after I leave, I will once again be overcome with an immediate desire to return to this grand continent. It is difficult to explain as any emotion is, but I can attribute is to certain facts and phenomena which are present here, subtle though all-permeating. First of all, there is a general contentment here (to make it more relevant, let’s say the word “here” refers for Bochum, Germany). People seem to enjoy their lives, not overworking or overthinking (see the photo above, a common view from the eyes of an inhabitant of Europe). Shops regularly close at 8pm, and do not open at all on Sundays. This not only confirms the aforementioned observation, but also acknowledges the fact that people are generally content enough with their lives to spend an entire day each week without dealing with consumer transactions or business matters. Next, the civilization (ie political or social system) is so well established that there seems to be little to no resentment among the people (although I am sure there are issues, to a foreigner like me, they are quite distant in frame of mind). Much in opposition to that of American culture, people seem to be generally satisfied with the state of national affairs and a mass bitterness towards politics is imperceptible here (I will not say non-existent, for the same reason as above).
And so, with all of these great aspects of life, one can’t help but feel satisfied. With no immediate fears or concerns, people can spend time having fun and amusing themselves. But meanwhile, the much of the world goes on suffering. This is why I am, in fact, objectively happy (please tell me if you know of an existing word that means “objectively happy”) I will be leaving soon. As someone like the person that I am, I cannot allow myself to be carefree and content when I know of such horrors going on. Although this lifestyle will surely pull me back someday, I have other things to do right now.
And therefore, you have the explanation of the “other story” introduced in the final sentence of the previous blog entry.