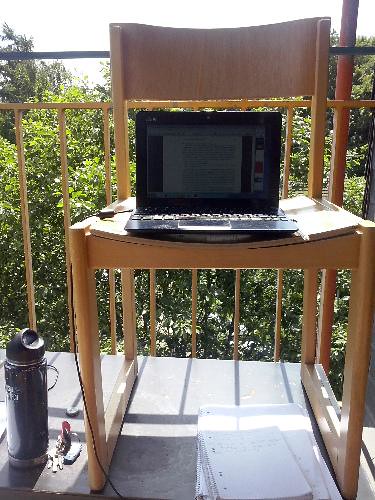 For those of you who regularly read my blog, you know I am frequently very philosophical and subjective in my topics and descriptions. However, today’s entry will be more of a narrative, to your pleasure or dismay (or neutrality).

I began intensively studying about one week ago at this time.
After receiving the results of my German exam last Tuesday (and being quite happy with them, albeit unsurprised), I decided to reward myself by procrastinating for a few days. So I took another German class on Wednesday, will was completely voluntary. In Europe, Language courses are all based on levels: A1. A2, B1, B2, and so on. The course we completed here did not have a designated level, but for all practical purposes it could be considered level A1. And so I went to an A1 class after finishing my A1 course, mainly for the fun of it, and I’m glad I see. This is because, as I may have previously mentioned, I wish there were more opportunities to meet student other than those in the Drexel group. And so here I found that opportunity. Also, today, I went spontaneously to an A1 Italian class, and the professor was very welcoming, not to mention I learned some basic Italian, which is important for my trip to Italy which begins one week from today. As a side note, I find it very useful to learn a foreign language in a foreign language, meaning by taking an Italian class in Germany, on can learn both Italian and German, provided he already has a basis in one of the two languages.
And so I studied and studied all throughout the weekend. I created a study post on the balcony of the apartment (see photo above) and with good weather and both my roommates gone for the weekend, I was left in peace and quiet and without social temptations for an entire 48 hours. With two exams ahead, Fluid Mechanics and Heat Transfer, I tried to balance my studying between the two, but with an emphasis on the first, because of the, the exam would be earlier.
Tuesday night. I come to the point where I am incapable of studying any more, and so I go to sleep at a pleasant 11pm, the earliest in weeks. Wednesday morning is the exam. As of now, I can remember not a single word, number, or image of that exam, but I remember feeling generally content afterwards.
Then Thursday: this time my use of time was not as efficient. I studied until two AM, with much of that time being caused by distractions, whether internal or external, and by the time I nearly passed out I had reviewed most of the course material, but not all! Then I woke up early on Friday, after dreams of thermal conductivities and conduction coefficients, and panicked, fearing I was lacking a understanding of some major topics. I watched one video lecture and then ran off to the exam room after buying a pretzel-baguette (a strange yet tasty combination of two cultural staples).
And now it’s all over. Academic term in Bochum Germany: Complete. But there’s still a week before I leave, where more adventures surely await.