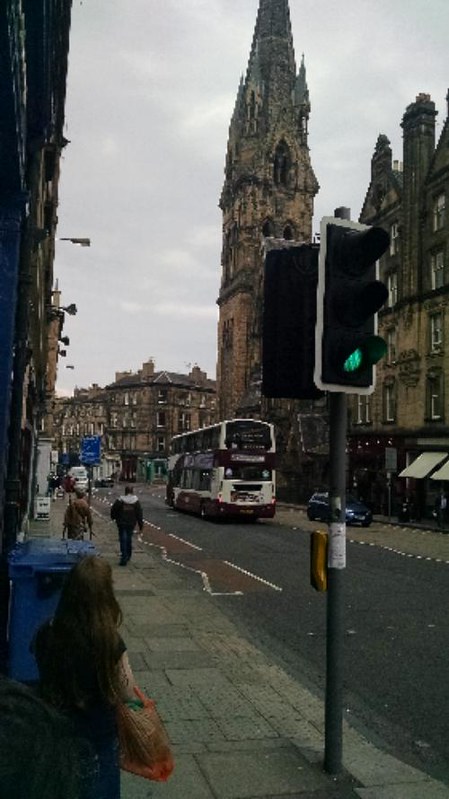 My first week in Edinburgh, Scotland was a shocking one. Of course, I was taken back initially by the overwhelming fact of being in another country for the first time. Because it was my first time anywhere outside of the Tri-State Area, I expected to be shocked no matter what, but I never expected Scotland to be how it was when it greeted me. Philadelphia is my hometown, and Edinburgh is nothing like my city back home. The city of Edinburgh welcomed me with the sweetest smile and the most touching open arms. Coming from as large of a city as Philadelphia, I never would have guessed that everyone would be as nice as they are in Scotland. I know I’m generalizing with that statement, but so far, it has been proven true.
My flatmates and I have been wandering aimlessly around the city trying to make sense of the busy, weaving streets – to no luck of course. But in the very least, the amiable locals giving us the most perfect directions have comforted us. If I were to drop someone off in the middle of Philadelphia, I would not feel comfortable leaving him or her with the local Philadelphians. Not only would I be worried about the dangers I put that person through forcing them to talk to the less than amiable locals, but also of what neighborhoods they might pass through on their way to their destination. That would never be the case for anyone living in Edinburgh, though. I am old enough to know that bad people and places are everywhere, but Edinburgh makes me feel safe, which is difficult coming from the city I was born in. The atmosphere here is magical. The people conduct themselves so politely; they seem to never turn away from a visitor or stranger. They all seem to be well educated, sociable, and very pleasant overall. I would be much more pleasant if I lived here too. The magic does not just consist in the people, but in the city itself. The history, the magnitude, the beauty is indescribable. The landscape of the city is very unique. Not only is it centuries old, something a young America cannot say about most, but the streets and city scape is mixed with hills and amazing mountainside landscapes. Edinburgh is designed very effectively and artistically. What amazes me the most is the great Edinburgh Castle. My flatmates and I have used the castle as a landmark the past week, but it is so much more than a mere landmark. The people of Edinburgh are lucky to live near such beauty. Philadelphia has its perks, but it is nowhere near the beauty of Edinburgh.