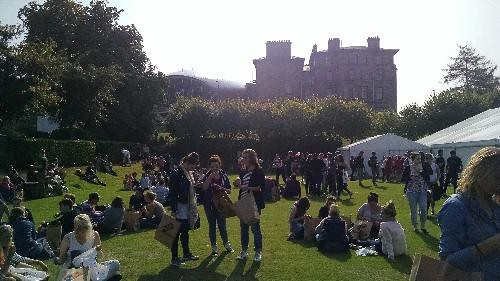 The sounds of Edinburgh have been surprising and exciting so far. I stepped off the plane a week ago and have not yet heard any silence. The closest thing to silence I have experienced is my quiet moments sitting by the canal outside of my flat. Other than those rare, reflective moments by the water and bountiful nature Scotland has to offer, I have not heard much silence. That does not mean the city isn’t peaceful. The atmosphere here is quaint, but the nightlife is a robust one. The bustle of a city whose bars close at one in the morning and whose clubs do not close until three have kept me awake. Young people shuffling everywhere in their boots on the cobblestone pavement continue into a time of night that I would not usually hear anything at while back home. Huge sounds from men playing bagpipes in the street fill the daytime around Princes Street and the Royal Mile. The culture here never sleeps. Even after the lights go down, people still carry on with their small dogs along the streets and the double decker busses drive at all hours. If bagpipes are not appealing, plenty of traveling musicians provide calming folk songs for tourists along busy corners. Seagulls screech from the early morning until dark, seeming to almost never sleep either.
The city of Edinburgh, Scotland is a drinking city. It is not a drunken city though. It is not sloppy nor dirty nor obnoxious with its drinking crowd. The crowd that drinks in Edinburgh involves everyone because the culture here is so accepting of alcohol. Scotland is a country that prides itself on what alcohol the produce and drink, as it should with such a fine history dealing in whisky. The drinking age is lower than in America and it seems that young adults do not take advantage of that as much as they do in the U.S.A. Drinking is a sociable event and a fun one. It may be safer to do so in Scotland because it is allowed here, meaning that kids do not have to worry about over-drinking because they do not need to drink such an extreme amount as in America due to how readily available it is in Scotland. The drinking crowd is not a loud or obnoxious one, like I said before. Although the talking and laughing of large groups of friends drinking together bother the calm, delicate nights, the nights are relatively calm here. I have not seen a fight, heard a bottle thrown unless it was into the trash, and have not needed to call an ambulance for a friend. My only conclusion to why it is so different in Scotland than from Philadelphia is that, when alcohol is accepted and well practiced by everyone, limits are exercised and practiced by those who drink, unlike by those who drink in America under aged. Being in Edinburgh has completely transformed my idea of what the drinking age in America should be. The city has also made me see the possibilities of how peaceful, yet lively a city can sound like at night.