Many of you reading this are going to study abroad or are at least interested by the idea. Before I get into the details of the study abroad experience and talking about what to expect I would like to introduce myself and my reasons why I decided to go abroad. 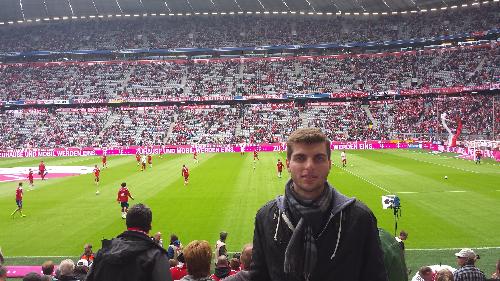 I’m currently starting my sophomore year at Drexel and I’m studying international business and German. I’m originally from Italy and have also lived in Belgium. I moved to the Philadelphia area ten years ago and went to middle and high school 20 minutes from Drexel. This somewhat international background made me very interested in studying abroad. High school was when I really started to think about going abroad. My school had several exchange students and I was always fascinated to learn about their cultures. Unfortunately, I did not have the opportunity to study abroad in high school and one of the reasons why I chose Drexel was for its study abroad programs. Last summer I did a backpacking trip through Europe and decided that I was going to try to study abroad as soon as possible. Thanks to my previous German language knowledge I could apply to the Mannheim program early this year and now I have been living in Germany for about a month and a half.

So why did I choose to study abroad? I think the biggest reason was that I wanted a change of scenery. It sounds a bit stupid but I really wanted to get away from Philly, not because I don’t like the city but because I felt that I needed to live somewhere different for a while, especially after living ten years in the same area. Another reason was that I wanted to improve my German language skills. I’ve been learning German for seven years and I felt that the past couple of years my German was not getting any better. I thought that the only way I was going to improve in the language was to study in Germany and be forced to speak German on a daily basis. Having German class once a day is nothing compared to actually living here. Another reason was that Mannheim happens to be the best business school in Germany and since I study business I wanted to experience their business program. Of course this would also reflect nicely on my resume but really this was not an important reason why I chose to study abroad. A major reason was that I wanted to see if I could live independently. Sure I spent a year living at Drexel, but home was so close that I didn’t feel like I was living away from home. Anytime I wanted to go home, I could. If I had any problems my parents were only a 20 minute drive away. As a result I chose to study abroad because I wanted to prove to myself that I can live independently in a foreign country. Many jobs in international business require you to live abroad and I wanted to see if that is something I could get used to. Of course another reason for me was that studying abroad opens up my mind to a different culture and now I have the chance to meet new people from different cultures. In the end I wanted to experience something different, that is why I’m studying in Germany.

Hopefully this gives you some insight into who I am and also into my thinking about going abroad.