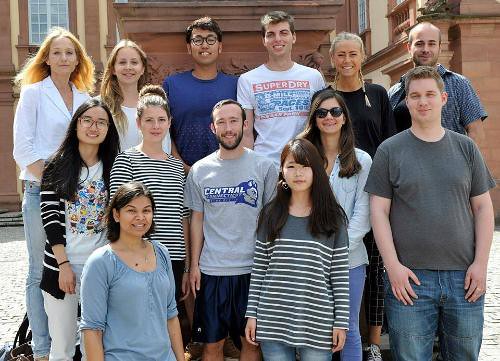 I arrived in Mannheim a month before the start of the semester in order to take part in the Internationale Sommerakademie. This summer academy is a program offered by Mannheim University for exchange students. The main focus of the academy is to learn German and they advertise it as a preparatory intensive language course.

I first learned about the summer academy as I was getting material ready for going abroad. Although there wasn’t a lot of information about it on the university website, I decided to enroll without too much thought. Enrollment was relatively easy, the only thing they required was that I took a placement exam before arriving at the start of August. I completed the exam and paid for the academy (around 500 euros) all that was left to do was wait.

The first day of class was a bit slow, everyone was getting acquainted with a new environment and with speaking in German. At the end of the first day I was worried that the summer academy was going to be a waste time. Over the next four weeks though I was extremely happy that I made the decision to attend the academy. I strongly recommend everyone to take this program if you are coming to Mannheim. Class was every morning from 9 until 1:15 and the afternoons were filled with extra seminars or excursions to other cities. I really enjoyed the teaching in the academy. The teachers refused to speak English and some actually couldn’t. It was frustrating at first but I learned so much more because of it. Being taught German in German was something new and something that I really enjoyed. It was more engaging and after being spoken to in German for 5 hours a day for a month, my language level improved greatly. The class sizes were also just right. My class had 14 students and that was big enough to have group work but also small enough to get individual attention from the teacher. The seminars in the afternoon were also good ways to improve my German. They covered everything from grammar to German history.

The excursions were the best part of the academy for me. Organized by the academy, these trips offered a way to see places, meet fellow students and socialize. With the excursions I managed to see a lot of southwestern Germany and meet people from all over the world.

The academy was a great environment overall to learn and socialize. The classes really improved my language skills and being taught in German added to my learning curve. The amount of activities offered meant that I had always something to do and that I always had a chance to meet new people. In the end the summer academy helped me settle into a new culture. (Picture is of my summer academy class)