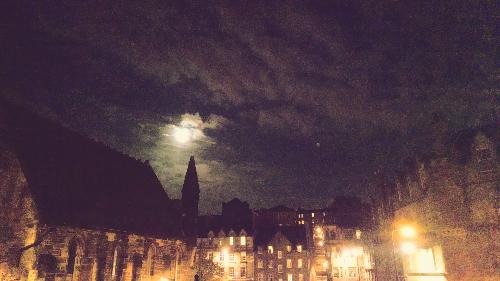 Scotland’s atmosphere is a great one. What partly attracted me to study in this land were its myths and legends. I was always fascinated by Irish folklore and the stories of things like fairies and banshees. During my high school years, I tried to tap into my Irish heritage. There is still a mystery about where my heritage comes from, either from Scotland or Ireland. I was raised under the belief that I came from an Irish family and that we immigrated to America during the great potato famine. But my last name, McAndrews, is a purely Scottish one. Most of my professors keep telling me this as well. Nonetheless, I became engulfed with researching the folklore and fairy tales of the Gaelic community. Never have I heard such stories about the good folk, or the wee people, small creatures called fairies. Never have I read about banshees, women who scream blood-curdling cries, but whom are only heard by those humans who are to soon lose a loved one. American folktales never amounted to such imagination as Gaelic stories had. With every new story I read or heard about, my curiosity grew. I wondered why these kinds of fairy tales only existed in Gaelic parts of the world and not in others. I only found out why when I arrived in Edinburgh.
When I turn the opposite direction from my campus I see the so-called rolling hills of Scotland. They rise higher than any other building in the area and the clouds seem to almost touch the tops of them. They are so green and rich in vegetation that I wish I could lay on them like pillows. This certain kind of beauty does not exist in America. We have hills, but none like these. The land here is so bountiful and beautiful. Paintings do not amount to the real thing at all. The old buildings and artfully crafted architecture date back to way before America was even thought of. The castle of Edinburgh is a great example of the man made beauty in Scotland. The castle grounds are also a great place to sit and observe Scotland’s atmosphere as a whole.
As a sat on the castle grounds one night, a full moon lit the sky. I saw the whole city and the misty clouds covering the tops of buildings. The fog surrounded me and the calm of midnight took over. It was that exact moment that I understood where such fairy tales could have been created, why Gaelic folklore existed only in Great Britain. I could feel the magic in the air and the uneasiness of some sort of energy creeping in on me. The atmosphere in Scotland is amazing and like no other. I honestly do not know why my ancestors left such a mysterious and intriguing place.