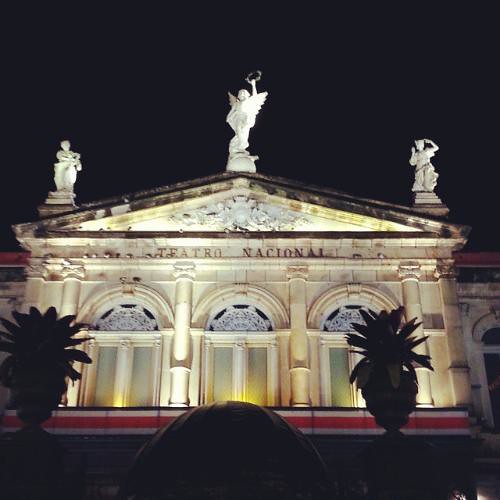 Well, my second full week in San José was definitely filled with the local artistic culture, in both classical and contemporary forms.

On Tuesday, our program took a trip to the Teatro Nacional to hear the Orquesta sinfónica comprised primarily of students from the region’s largest public university, la Universidad de Costa Rica. The group played a total of three pieces, all varied in style. They began with The Hebrides by Felix Mendelssohn and then led into el Concertino en sol menor para saxofón y orquesta, written by Costa Rican composer Allen Torres and with saxophone solo by the talented Javier Valerio. The group concluded the evening with Beethoven’s Symphony No. 3, entitled Sinfonia Eroica, a rigorous piece depicting the emotional turmoil and triumphs of war. As a whole, the group was quite impressive as the students performing in it were not necessarily studying music or the arts, but were solely there for love of the music. I truly appreciated this aspect of the group as it reminded me of my personal experience with the Drexel Players, none of whom are theater majors, but who dedicate their time and effort to perform solely for the love of the art. However, some of the other students and I have a love and consequently critical ear for classical music, and we left the concert feeling… underwhelmed. The music was beautiful, but the orchestra itself was disorganized and uninspired. But, music is music, and I was happy to hear those 3 beautiful pieces performed in the stunning Teatro Nacional.

Then, on Friday evening, I went with a group of some of the students in the program to see a local contemporary dance performance. We were told about the piece by the professor of our Human Rights in Latin America class. She accompanied us to the performance at which we found out that her father was the director! The performance was a contemporary dance piece in three acts depicting the myth of Sisyphus, called P.E.E.Z. (Pierda en el zapato, or Stone in the shoe). In ancient Greek mythology, Sisyphus was a prideful king who was punished for chronic deceitfulness by being compelled to roll an immense boulder up a hill, only to watch it roll back down, and to repeat this action forever. The performance took this myth and translated it into a production halfway between myth and reality, a specialty of many of the Latin American arts. The first act of the piece focused on the creation of Sisyphus, what led him, and truly what leads all of us to stubbornly journey towards our own condemnation. The second act focused on the trials of Sisyhpus, the struggles and horrors he, and we, encounter every day doomed to relentlessly shoulder our personal boulders. The third and final act, in my opinion, portrayed more concrete and contemporary examples of boulders that paralyze the modern man (i.e. drug addiction and relationship struggles.) The piece as a whole was quite intense and extremely powerful, moving some of the students to tears. The ensemble, again, was comprised entirely of students from Universidad Costa Rica. These students, too, were wildly impressive and talented. The piece was very physically demanding and the students more than rose to the occasion, leaping, crawling, and writhing in their depiction of this horrible human condition.

As a lover of the performing arts, I was thrilled this week to be exposed to Costa Rican art forms and I look forward to experiencing much more throughout my time here.