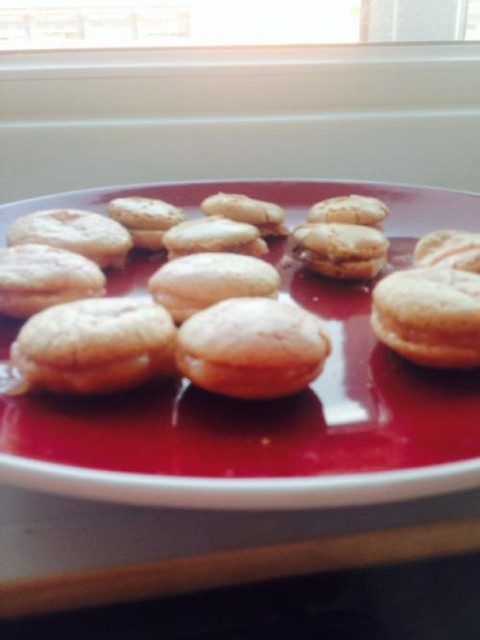 Throughout my study abroad experience, I feel the constant need to avoid falling into a dark pit where English is the only spoken language. At a school where all classes are taught in English and some international students speak English, but not French. Therefore, it’s important to speak as much French as possible outside of campus, as well as, with friends. Even if your friends do speak English, it is more useful to practice French when talking to them. This way, you can actually get some language practice by living abroad.
My French has not been truly tested until a friend and I attempted to make macaroons last Sunday using a recipe en Français. I have already been accustomed to using French when going to the grocery store, going out, receiving help from French bureaucracy, however, this macaroon recipe was a true challenge. Not only was the entire recipe in French, but also some of the required ingredients were completely unheard of across the Atlantic. Further, the measurements were in grams rather than ounces, which although is at the fault of the United States, was a difficult, as well. After for hours and a lot of confusion, my friend and I were able to successfully bake two batches of almond-flavored macaroons. They were fantastic.

Here are some tips for baking while studying abroad:
1.   Understand the limitations: most residences here do not come with an oven. Fortunately enough, my friend bought a mini toaster oven, which we were able to use. Further, most students do not have the equipment for heavy-duty baking. It simply does not make sense for many international students, especially those here only for a semester, to buy mixers, blenders, and cake pans.
2.   If you do bake, invest in a scale: my friend was able to buy one for less than two euros; using a scale made measuring everything in grams so much easier. French recipes do not list things in ‘cups’ or ‘tablespoons’ as everything is simply measured in grams.
3.   Read the recipe in full before starting to bake: we decided to skim the French recipe and then read it in more detailed as we baked. This proved to be a bad idea as we learned that the cream had to be held in the fridge overnight before being added to the macaroons. Although we were able to improvise, and still make delicious macaroons, the colder cream did taste better when we ate the remainder the next day.

And for those of you who love baked treats, but hate the hard labor, one can find a patisserie on every block in Reims.