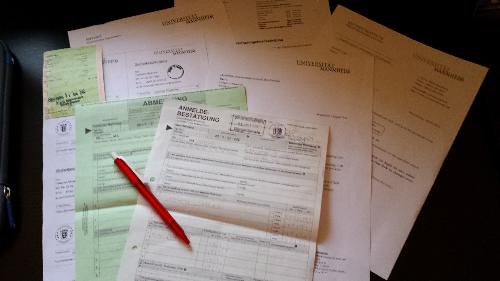 Once I arrived in Mannheim and moved into my apartment I realized that there was still much more work to do before I started school. Unfortunately most of the work dealt with filling out forms, signing papers, and making sense of the German bureaucracy.

The first order of business was to register myself as a resident in Mannheim. This is mandatory and must be done within the first week of arriving. To do this I had to go to the government office, which is where I first witnessed the mess that is the German bureaucracy. Before going to the office, which is on the other side of the city, I checked their hours on the internet. Apparently their hours on their website and the time they are actually open differ. My first visit to the office was met with a locked door and no information regarding opening times. The second time though proved more successful and I managed to get into the office. Unfortunately, the residency form is all in German and if you are not fluent in German, words like Staatsangehoerigkeit, might prove a bit tricky to figure out. Furthermore, the office workers I dealt with didn’t speak any English and if it wasn’t for my German flatmate that came with me, I don’t think I would have gotten my residency stamp.

The next step was to matriculate into the University, which turned out to be many steps. First I went to the International office and provided them with my letter of acceptance, passport, and proof of health insurance. Before though I could be matriculated I needed to go to another office and have a health insurance representative sign off on my health insurance. After being solicited to buy a German health insurance (which I didn’t buy) I went back to the International office. After checking my paperwork again I was given a proof of matriculation paper. The process was far from over though. I then had to go to another office, the Information office, to receive my student card or eCUM card as it’s called. At the office I had to again show them my paperwork and the proof of matriculation. They then proceeded into making a student card for me. After I received my card I had to go to one of the university kiosks to activate it. Only after I activated my eCUM card could I go back to the information office and ask for my account log in and password information. After I showed them my activated eCUM card, I received the paper with the information and also directions to how to activate my online account.

In the end it took me several days to become a resident of Mannheim and a student at the University. Although there were helpful people guiding me through the process, it seemed that there were unnecessary steps that I had to take. I’ve come to learn that in Germany the bureaucracy is overly complicated, confusing, and inflexible.