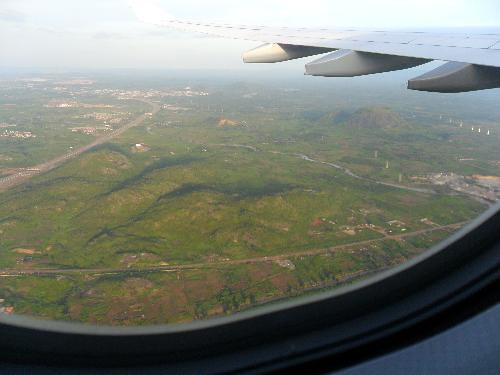 I’ve been in Malabo, Bioko Island, Equatorial Guinea for almost a week now. I’ve got to do two of these a week, but our internet has been pretty unreliable. Our router is a tiny little box that somehow magically connects to the internet via satellite – sometimes. It was out for the first few days, but hey, this is Africa and if you expect anything better than that, you’ve got to be kidding yourself.
So anyway, I guess I’ll start from the beginning. After a 20-some hour trip, I arrived with a group of 9 other students in the Malabo Airport and piled an absolute ton of luggage into a van – we each had 2 check-in bags of about 50 pounds and two carry-ons. (A note: the picture I’ve attached was taken while landing in Abuja, Nigeria, the last stop before Malabo, where it was too dark to get any good arrival photos) From the instant we got off of the plane, it was pretty abundantly clear that this is an entirely different world. The baggage claim was swarming with people offering to carry our bags on carts for us in exchange for pay, which we were told would be an egregious amount if we’d accepted. And while security was checking my bags, our resident director, David (a less than average height guy in his mid-20s whom we’ve now collectively named papa) had to angrily stave off a man who’d insisted that I asked him for help. He did this entirely in Spanish, and I guess I haven’t mentioned – Equatorial Guinea is the only Spanish-speaking country in Africa, and I don’t speak a lick of Spanish. So the whole communication thing has been pretty tough, but I’m getting there.
We got to see some of the place on the drive from the airport to our house, but since it was dark, we didn’t really see anything all that well. When we arrived to the house and moved our stuff into our rooms, my two roommates and I learned we wouldn’t have lights in our room and some of the outlets have way too much current or voltage running through them. But David assured us this would be fixed in a day or two. That day or two has lasted all week, though, and still hasn’t been fixed because everything here runs on “island time,” which basically means people get to things when they get to them and very rarely is that quickly. Our room does, however, have a bathroom in it, which is convenient. It’s a luxury here to have running water, so we can’t complain about the cold showers. And to be honest, when you’re in the tropics a cold shower isn’t all that bad. It’s in the 80s or 90s every day with humidity at usually at least 90%.