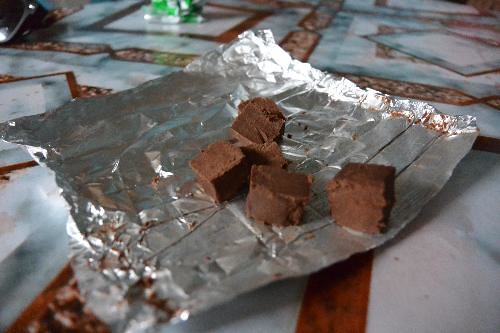 On Sunday, we took a trip to Arena Blanca, or the White Beaches, which is southeast relative to Malabo. Or at least that was our initial plan, before we woke up to torrential downpour. It is, after all, a rainforest so that really shouldn’t have been much of a surprise. And forget about planning for weather for these kinds of things; weather service here is unreliable at best.
But weather here can be patchy, so we figured maybe it wasn’t raining at the beach, which is about a 40 minute drive away. So off we went. It was still raining when we were about 20 minutes away, so we decided to stop at the only place on the island that makes chocolate because it was conveniently on the way. Just a little background on that topic: the main economic driver on this island used to be cacao. Where there is now quite a bit of development, there used to be thousands of acres of cacao plantations. Over the years, cacao plantations dwindled and now there is very little cacao produced on the island and only one single place that actually makes chocolate–a tiny “restaurant” that looks somewhat similar to a horse stable up in the mountains of the eastern part of the island, surrounded by nothing but rainforest. The restaurant is run by a husband and wife and their daughter, and they serve and sell a variety of products made from cacao and coconuts.
Naturally, the first thing on all our minds was sampling the chocolate. However, we didn’t get that chance, which turned out to be a good thing. First, we were given cocao beans to sample. They were incredibly bitter and had a very strong chocolatey flavor. Then, we were given a platter with some chocolate butter to spread on bread and some chocolate. The chocolate was very soft and super bitter, but surprisingly delicious. This was served alongside these rock-hard (seriously, they were painful to bite) cookies made from coconuts that were deliciously sweet. After we’d finished sampling all these delicacies, we were given hot water to mix with chocolate powder, condensed milk, and homemade honey, which tasted more like molasses than honey but was delicious nonetheless. Greta, one of the students living with us, mixed what was apparently the perfect mixture of these ingredients.
Everything was absolutely delicious. It was the perfect combination of a friendly family, delicious food, and pouring rain.