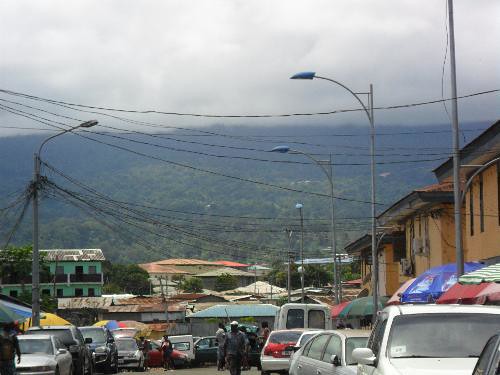 On Sunday we were invited over to the Hilton Hotel on the island by a big time oil company executive whose company funds the Bioko Biodiversity Protection Program. That was super nice and we got lots of free food and drinks at a pool, but it’s not really why I came to Africa so I’m gonna just glaze right over that. On Monday we got to really see the city. We met up with some students from the university at which we’re studying, the National University of Equatorial Guinea (Universidad Nacional de Guinea Ecuatorial, or UNGE for short) and split up into small groups to go on a scavenger hunt for landmarks in the city. We walked to most of the destinations, which allowed us to get an idea of what the lifestyle is like here. The first thing I noticed was the fact that there aren’t really traffic laws here. Or at least none that anyone follows. One way streets? Sure there are signs but who cares? Go whichever way you want. Stop signs? Ignore them, just be sure to stop for people trying to cross (which people are actually very very good at here). The streets and sidewalks aren’t as clean as they are in America, but there certainly isn’t trash everywhere. The first two destinations we visited were the Spanish and French Cultural Centers, which each have libraries, movie theaters, music rooms, and regularly host cultural events. Then we visited the presidential palace, which was absolutely gorgeous. Unfortunately, I couldn’t take any pictures of it because the government here forbids taking pictures of any federal buildings or people. The government is something of a dictatorship, but I won’t describe that now. Lastly, we went to the central market (or Mercato Central), which was incredible. The best comparison I can come up with is a scene from Indiana Jones. It was an open market, with stands organized kind of how they are in farmer’s markets in the US. But these stands were incredibly densely packed. There was a section with housewares, one with electronics, one with clothing, and one with TONS of fresh fruits and vegetables, many of which I’ve never seen or heard of. I’m sure there are plenty more types of shops that I didn’t see. I didn’t have a chance to take a picture inside the market because it was so busy, but I got a great one of the street next to it which I’ve attached. It’s fascinating to see a place like this because people often do ALL of their shopping there; rather than just picking up a few fresh ingredients and hanging out. And all of the vendors there make a living off of it. It’s a strange thing to see people selling clothing (that may or may not be used) with American logos in a developing city on a rainforest island halfway across the globe. But while our culture has permeated theirs to some degree, most things are still very different. This is a whole new world and it’s pretty incredible to be so surrounded by a culture so different. I’ve never blogged before, so I’m still getting the hang of how to end this type of thing.