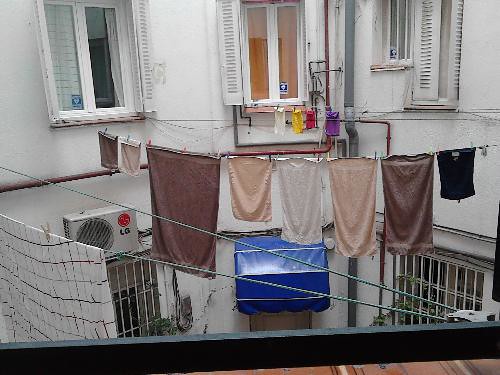 When I noticed that it is not customary for apartments in Madrid to have a dryer as well as a washer, I immediately thought of the South in the United States. An apartment in Madrid either has a washer in the kitchen or not. Summer in Madrid is dreadfully hot, which explains the lack of a dryer and the use of a clothes line. It amazed me how the builders of the building were considerate of the weather and therefore, constructed the apartment building in a way that created an inner area where clothes lines cannot be seen by non-residents of the building. The photo for this post illustrates this. One would think that this construction would cause a great sense of community, since those who are the same floor are forced to look at their neighbor. However, Spaniards just stare. I tried waving at my neighbor once but she just turned around, after staring at me.

There are many elements of the culture here that would cause one to think that there is a great sense of togetherness that is expected and appreciated; however, it seems that the “togetherness” is exclusive. Spaniards seem to actively determine who is a foreigner. This observation has not taken away from my experience entirely.

I decided to study in Spain to further perfect my Spanish speaking skills. However, wherever I go, I feel compelled to speak English in order to please Spaniards. Upon arriving, whenever I spoke Spanish, I received an answer in English. At times, I took the hint and opted to speak in English, though their English was not up to par. I considered the disappointment a part of the experience and a learning lesson about Spain’s culture and people. I was disappointed that very few people were and still are willing to entertain me, though I cannot speak the language as fast as they can. Most Spaniards do not have much patience if Spanish is not spoken quickly.

I’ve been yelled at several times while trying to receive service. Oftentimes, this happens when I have a minor issue with my public transport card. I may approach one employee who tells me to speak to another employee across the station. When I get to that person and explain my issue, he or she tells me to return to the employee I originally approached. Undoubtedly, when I return to that person, he or she is frustrated because it seems that I did not follow his or her instructions. Speaking English comes in handy at times because they realize I’m a foreigner and at times, they are more understanding.