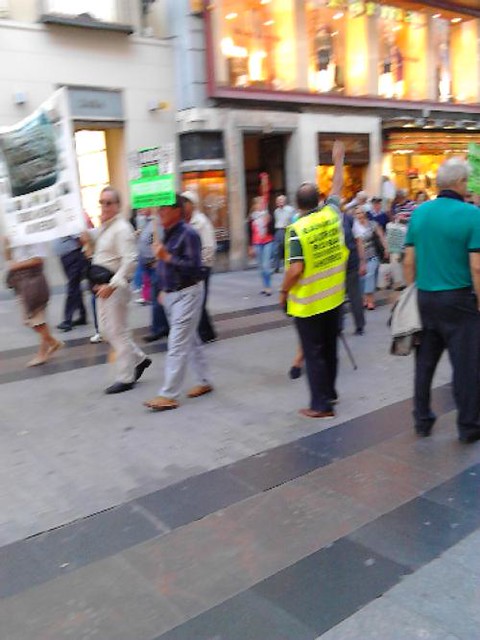 It is commonly known that the right to protest is perceived as a human right. This blog post focuses on my experience witnessing this human right in another democratic country, Spain. For the first time in my life last week, I witnessed a protest. I have participated in a protest once before but never witnessed one. Last week, I had the opportunity to walk by a very intense protest. As any other protest, it was loud, it caught the public’s attention, the picket signs were moved up and down, those who protested resembled soldiers, and policemen were present.

I was very excited to have had the experience. I was also alarmed by who was protesting. When I heard the shouts and saw the picket signs, as I was walking through a normally highly populated area, I did not expect the protestors to be seniors. I never thought the first protest I will witness would be entirely comprised of the elderly.

The protest seemed to be focused on exposing the faults of banks in Spain. This theme was also shocking to me because it implies that seniors are still in charge of and aware of their financial affairs and activities. I’m used to idea of the elderly being thought of as “shut-ins,” by either living alone or in nursing homes. Thus, I was surprised that they opted to actively protest themselves.

My neighbor in Madrid is filled with seniors. The only middle aged people I see are shop owners and some residents of apartment buildings. I’m still not sure if they live in the area I live or if they enjoy spending their days in the area. I do believe that they do not work. Most times, no matter what time of the day, I see seniors sitting and laughing on benches or at tables outside of a restaurant. At times, I witness them interacting with their grandchildren by either paying with them in a park or talking to them as they push a stroller.

The elderly here seem to be technologically advanced as well. I’ve seen many of the elderly play games on their tablets on the trains or text rapidly alike many teenagers. Witnessing seniors demand a change and attention definitely caused me to think of senior citizens differently. I have always had the intent to respect them but always felt compelled to be more gentle and kind with them because of their age. Hereafter, I will aim to treat the seniors like the other younger citizens here and when I return to the United States.