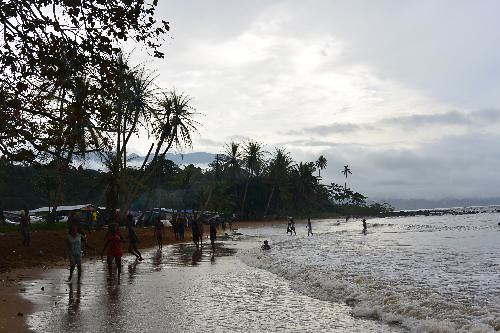 By the time we were done with the chocolate, the rain had let up a little bit so it was a good time to keep moving on to the beach. So we got back on the perfectly paved road and drove through the jungle for another 20 minutes or so until we came to an intersection. So we turned at the intersection and drove about a quarter mile until we came to a roadblock consisting of two military vehicles and some soldiers who asked to see all of our UNGE ID’s. If we didn’t have those, we wouldn’t have been admitted to the beach. I guess you need some valid explanation as to why you’re going to the beach, and somehow a college ID outranks a passport for vacation activities.
Side note: Something we’d also learned about the military here, other than the fact that they also take the role of police, was that they will stop people at random throughout the city and ask for papers. If someone can’t produce papers (which is common due to the influx of illegal unskilled labor jobs since the oil boom) they are expected to pay a bribe. If they can’t pay a bribe, they’ll get sent to jail, and presumably deported, but it’s very unclear if that last part actually ever happens. Also, they don’t feed you in jail, so unless you’ve got a friend or family member bringing you food you’re in pretty deep trouble.
Anyway, we all had our papers so we were good. We went on through to an area with a few shack-like houses, people scattered around at grills selling food, a few huts with bars in them, and gazebos along the beach with tables and chairs in them. Since chocolate didn’t fill all of us up, David took me and two students over to one of the grilling vendors to get chicken kabobs and giant African land snail kabobs. Yup, giant African land snails. Their shells are probably 6 or 7 inches long and the meat (which was obviously the part on the kabob) is about 2 inches long. So we ate these chewy smoky things on sticks, which I have to admit I wasn’t the biggest fan of. And the chicken, well it probably wasn’t chicken. The woman who sold it to us said it was, but it definitely was not chicken. Our best guess was pork or lamb, but we didn’t want to make too many guesses, especially since stray dogs can be seen wandering around everywhere there are people–including the beach.
All the while, it was raining at the beach. Not torrentially, just a constant drizzle that picked up every now and then. But since we were in the tropics, it didn’t matter. It was warm enough to go in the water too, because the water temperature was so much warmer than what I’m used to in New Jersey. The water wasn’t clear like it is in Florida, so in that respect it didn’t quite match the postcard picture of a tropical beach. Also, there was just an incredible amount of trash along the tide-line where the eating areas were. That was new: I’ve never been to a beach that didn’t have anyone paid to remove the trash, and it was hard to tell if there is a culture of littering or if it’s just an accumulation from a few negligent individuals. But all we had to do to escape it was go a little farther down the beach, which steadily got more and more beautiful. But before we did that, we played a long game of soccer in the rain with some of the locals. Considering we had only one student who’s actually played soccer competitively, we held up pretty well. We used sticks as goalposts and the ocean was essentially the only boundary. The tide sometimes ruined passes, but we didn’t really mind.
Once we were all significantly exhausted from the soccer game, we moved on down the beach to explore the coastline. The trees coming from the edge of the forest created a beautiful corridor over the sand. When we got maybe a quarter mile from the main area, we went in the water. The waves were powerful but not overwhelming, and we had an incredible view of the caldera of Bioko’s volcano while the clouds were clearing out. All in all, it was a fantastic beach trip.